What Place Do Women Have In Metal?

At first glance this sounds like the most sexist thing I’ve ever written.  In reality, it’s just a pet peeve of mine that I need to address.  For some reason now when it’s known that a band has a female vocalist, they are put on this usually undeserving pedestal.  I will also state right off the bat that I dig the shit out of some good female metal, but equally hate bad female vocals with a fiery passion.  After enduring a painful set by Straight Line Stitch opening for Soulfly last Sunday it kind of made me think about this a little bit more.  The band wasn’t bad as a whole; it was just the vocals that negated anything good the band could possibly do.  Also I’m not taking backup vocals or any instruments into account here.  There are women who can kick a man’s ass at every instrument and I’m aware of this.  There are also women like Marta from Bleeding Through who don’t even play the keyboard intro to their own live set, which makes it obvious that they are just a sex symbol used to attract fans.

Back in the mid 90’s a group of teenage girls named Kittie stormed onto the metal scene and began to reestablish female metal.  With a stint on Ozzfest and massive airplay from MTV,

and Otep hot on their heels, females in metal became all of the hype.  A decade and change before them of course was Lita Ford, Joan Jett, Warlock and Vixen.  Unfortunately the biggest mark they left on the current generation is ‘Barracuda’ being included on Rock Band.  At about the same time in the 90’s, female fronted bands were sprouting out from all over the world and would later gain success in a strange, sad fashion.  Bands like Lacuna Coil, Tristania 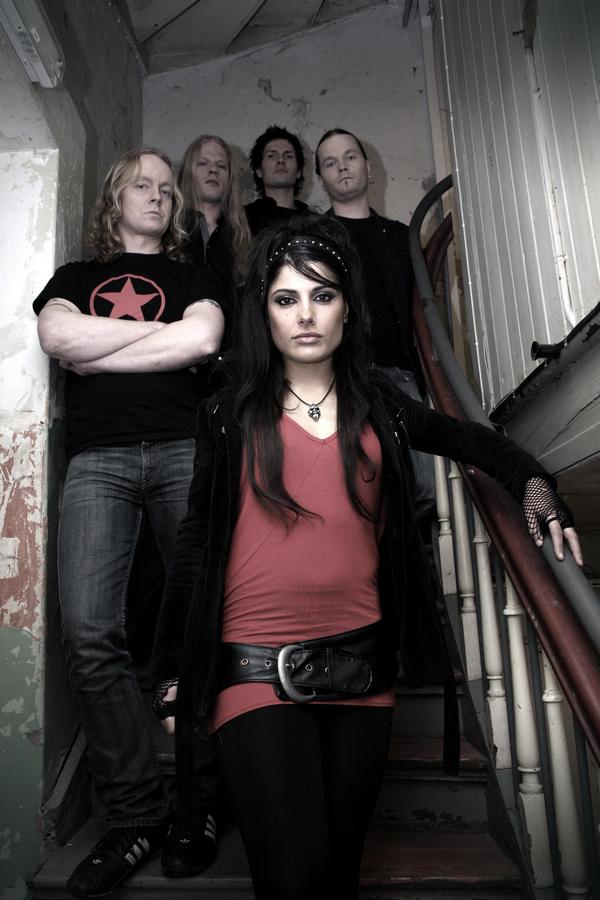 , Beseech, and Within Temptation all formed around this time but gained minimal notoriety until a few years later when Evanescence exploded onto the mainstream.  Every metalhead knows that Evanescence is about as metal as Creed, however they became the VH1 crowned forerunner in female fronted rock and ‘metal’.  Lacuna Coil’s Comalies was released in 2002, and then Evanescence’s Fallen was released shortly after in 2003.  Fans of Evanescence then accused bands like Lacuna Coil and Within Temptation of stealing their beloved Amy Lee’s trademark sound despite having been the ones to actually lay the groundwork for the movement.  Fans of musical talent realized that there was some spectacular music hidden from the public eye and embraced bands like Nightwish and The Gathering with open arms as a welcome relief from the pop radio sound of the Paramores and Flyleafs that would soon haunt us for years to come.

I know that the Angela Gossows in the metal world are VERY few and far between unfortunately and I’ve come to terms with this.  Arch Enemy also brings the total package musically which is something that most people overlook.  However, most women who can scream all of a sudden think that they are a hot commodity in the metal world because Revolver will feature them as a ‘Hottest Chick In Metal’ regardless of them not even having an album under their belts.   Bands like The Agonist, In This Moment and Walls Of Jericho become generic and interchangeable now that there are so many horrible female singers who have cashed in on the horny teenage boy factor of metal.  There are girls like Taylor Momsen (yes, the same actress from ‘Gossip Girl’)

who know that many of us would like to find a way to lock her in our basements, so they front a metal band seemingly just for the attention.  Then there are the Jada Pinkett Smith’s who just have entirely too much time and not enough talent on their hands that think they can scream.  Unfortunately, most of the up and coming female singers either fall into the ‘I’m ungodly hot so who cares if I can sing’ or the ‘I am woman hear me roar regardless of my lack of rhythm’ categories.  Unfortunately, bands like Lacuna Coil also seem to have become less inspired to write good music since becoming an international sex symbol.

I believe that Revolver’s idolization of women in metal based on looks alone is a regression in music.  For as nice as it is to stare at a hot chick or fifteen in an otherwise waste of a tree and ink publication of outdated news, the ‘Hottest Chicks In Metal’ dismisses musical talent in favor of cleavage.  Seeing Lzzy Hale

from Halestorm on an opposing page from Varg Vikernes makes it totally obvious that they’re marketing to the wrong demographic but will keep doing so in hopes that 14 year olds will keep them from going belly up.  I will go as far as saying it’s degrading to women when they discredit everything that somebody has done because they’ll wear lingerie and stilettos in a photo shoot for them.  When their lame excuse for an interview consists of asking sexist questions and not one word about their music, it doesn’t leave much for women to aspire to.  If somebody said that the sexier our guitar was the more we would play like Eddie Van Halen, don’t you think we’d all spend our life savings on the nicest guitar money could buy?  Thankfully, a nice guitar doesn’t make a great guitarist (did you hear that Job For A Cowboy?), and a great rack doesn’t make a great female vocalist.  The stereotype they’ve created makes it less necessary to have talent and more important to have breasts to be successful.