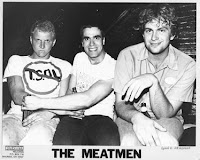 From humble punk rock beginnings in East Lansing, MI circa ‘79, The Meatmen rose to heavy-duty heights in the 80s and 90s before putting the brakes on in ‘96. Their legacy is rich in punk history and they’ve played shows with many of punk’s essential bands, including Misfits, Minor Threat, Fear, Dead Kennedys, The Fix, Necros, Negative Approach, and more.

Now, after a 12 year lapse, The Meatmen bounce back big with a 24 track ode to the tuneage of yore with Cover The Earth which features all of Tesco’s favorite musical blasts of the last 40 years. Some are obvious (Fear, GG Allin, Johnny Thunders) and others are real head scratchers (Jimmy Dean, 10CC, The Temptations). All delivered in reverential but irreverent form by the latest and greatest men of Meat! It features a full-color 12-page booklet and all the between song schtick one comes to expect from a new Meat platter. Also features a return of the legendary Hebrew pitchman Shecky Schpilkis in “Sex Mart 2010.”

Tesco Vee is finally a toy! No one in punk rock more deserves to be so offensively animated, than Tesco Vee of the Meatmen. The people of Aggronautix have created a limited-edition figure (1000 numbered units) standing 7 inches tall, and made of a lightweight polyresin. Displayed in a tri-windowed box, here Tesco is accurately sculpted right down to the ABBA pants and clogs.

Check it out here

The Meatmen are coming to a city near you….