If you can’t tell, it’s been pretty eye bleeding when it comes to new releases lately.  I haven’t gotten excited about anything in over a month since I first got my hands on The World Is Yours by Motorhead.  Once again I’ve had to dig through the archives or search out some more obscure music to keep me occupied.  So once again it’s time to share some music that you may or may not already have or even have heard of. I don’t expect many people to have heard of this band.  Honestly, I have just recently been getting into them as well.  Velcra is a female fronted Finnish industrial metal band dating back to 1999.  Think Otep’s intensity with the abrasiveness of the Kidneythieves on this album.  Lead singer Jessi Frey bounces all over the board with catchy as fuck nu-metal screams one minute to clean, soft vocals the next.    This was also at one time a side project of Amorphis guitarist Tomi Koivusaari although it’s a totally different animal than his main band.  Opening track ‘War Is Peace’ actually sounds like something Otep herself would have penned during one of her anti-government temper tantrums.  Overall, it’s a ten track album of a chick that can actually both sing and scream worth beating on your steering wheel for.

Does anybody else remember this band?  The only time you ever hear of them a decade later is because this was where Five Finger Death Punch guitarist, then bassist, Zoltan Bathory made a name for himself although he didn’t appear on either of their albums.  No Pleasantries was a catchy post-grunge album that was right down your alley if you’re a Days Of The New or Candlebox fan like myself.  It is however one of those albums where the two singles, ‘Godless’ and ‘Feel Alive’ are actually hands down the two catchiest tracks on the album.  Upon first listen, you’ll realize that you have in fact heard both of these songs sampled many times before from sportscasts and TV shows for years.  It isn’t very heavy but it is catchy and had the obvious potential for bigger things that never happened.

Once upon a time in the early part of the 21st century, metalcore was all of the hype.  Clean, heavy vocals resembling those of the front runners in Killswitch Engage were cool and the Cannibal Corpse growling in metal just wasn’t trendy.  At the same time, on the other side of the world in Australia, Sydney’s Daysend were figuring out how to get insanely clean, catchy vocals behind heavy and catchy riffs that would show the American crowd how it was done.  I can safely say that for this genre of music, this album is probably as tight as they come and if you don’t believe me just put on the opening track ‘Born Is The Enemy’.  This album has the heaviness of a band like Unearth or Trivium with a distinct sound of their own at the same time.  It’s no wonder that after the album’s release, they were touring with the likes of Machine Head, In Flames, The Haunted and Carcass shortly after.

This is an undeniably cool album for metal fans.  It has the improbability of a Dillinger Escape Plan album minus the sheer spasticness of DEP.  The songs on their debut and currently lone album have the formula of punk or hardcore songs with a distinct metal flavor.  As the brainchild of Mikey Doling formerly of Snot and Soulfly, you know right away to expect the unexpected here.  For fans of something just different like the people who fell in love with System of a Down at one time, this is the album for you.  Hell there’s even a tribute to Lemmy’s moles, appropriately titled ‘Lemy’s Lumps’. 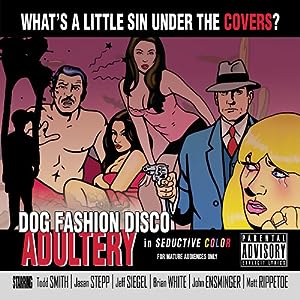 Dog Fashion Disco’s sixth and final album is still my favorite.  It’s a conceptual album telling a twisted story that you can only expect from the insane minds that comprised DFD.  Somehow they found the coolest way to mix half a dozen genres from jazz to hardcore into a story about a man going crazy, smoking crack and having a pension for killing prostitutes.  It’s a deeply disturbing album where the spoken portions of the album and jazzy interludes make you feel like you’re in the middle of a black and white mystery film.  It’s the perfect album if you’re into strange, strange lyrics, lots of violence and just something completely different.