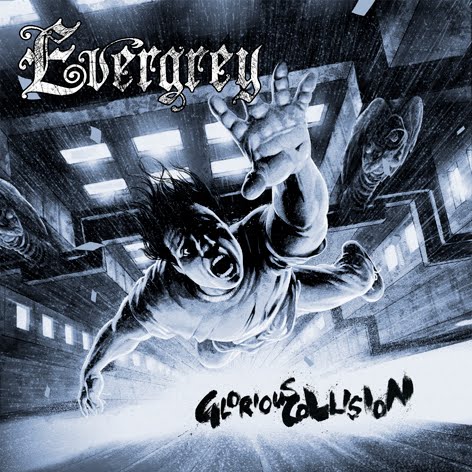 It’s been almost three years since the release of Evergrey’s last album, Torn, and a lot has changed since then.  In May 2010 it was announced that drummer Jonas Ekdahl, bassist Jari Kainulainen and guitarist Henrik Danhage were all leaving the band to salvage their friendship.  If that isn’t enough to worry you into whether a band can recover or not then you’ve never followed metal.  Even the greatest singers in the world can’t recover if they’re playing with a half-assed makeshift band (yes, I’m looking at you Axl Rose).  Thankfully, Tom S. Englund has arguably some of the best pipes in the progressive/power metal world and he’s done a nice job at recruiting a new supporting cast as well.

Glorious Collision is an album that grows on you with each listen much like Torn did whereas albums like Monday Morning Apocalypse had the instant catchiness factor.  The album stays true to classic Evergrey with heavy riffs, clean melodic vocals and emphasized keyboards so if you’re a fan of the first seven albums then you’ll be just fine here.  The overall theme of the album here appears to be solely of regret and an apology for a failed relationship.  It leaves one to wonder if the band dissention in 2010 is an undertone for the theme here as well.  The lyrics here are filled with sorrow from top to bottom in a way that would make the emo kids slit their wrists by the second listen.  There probably aren’t any songs here that scream heavy rotation like ‘Fear’ did on Torn, however there are no meaningless or shitty songs here either.  It’s a very good album to be played from start to finish over and over again especially if you’re trying to cope with a breakup or past memories of your own.  Lyrically it’s almost as powerful of a breakup album as Stabbing Westward’s Ungod, just not from the violent, angry viewpoint.  ‘Leave It Behind Us’, ‘Wrong’ and ‘To Fit The Mold’ set the tone for the storyline here while the remaining seven of the first ten songs reiterate the point.  The end of the album with ‘Free’, ‘I’m Drowning Alone’, and ‘…And The Distance’ capture the darkest emotions of a relationship falling apart and a final proclamation explaining why it all really went wrong.

I feel a bit like a dick for neglecting the musical portion of the album thus far however.  There are some nice guitar solos like the one three minutes into ‘Wrong’ and the keyboards add a very nice touch to this album throughout.  The biggest thing with Evergrey however is how overpowering the vocals are to the rest of the music at times.  There is still room for improvement on the vocal to instrument ratio on some of the songs because the intros seem to be the shining moments of musical genius aside from the catchy riffs that Evergrey are notorious for.  The new musicians hold their weight very well here when they are showcased but this more than any other seems to be Tom’s album.

Overall Glorious Collision is a metal album that I can fall asleep listening to.  While that would usually come off as an insult towards most albums, I don’t mean that as a bad thing at all.  To me, progressive and power metal albums need to have a sense of serenity to them while still maintaining some balls.  This is a very balanced release without any overwhelming highs or lows and I very much appreciate that when I’m dabbling into this genre.  Also, the one thing that has always drawn me into Evergrey more than other power metal bands has been the very relatable lyrics of heartbreak and general anguish that have been conveyed nicely once again here.  While it’s not a knock against the talent of any other band by any means, I don’t feel the same connection the songs are about slaying fictitious dragons or sailing the Baltic as I do when I hear the genuine pain in Englund’s voice.  Evergrey has always done a masterful job at staying with a common storyline throughout albums and they did excellent with that and tell a great story here.  It is my second favorite album of theirs to Monday Morning Apocalypse and will be seeing very regular airplay for me.  Musically I’d give it a 7.0 and lyrically I’d give it a 9.0 so I guess it gets an 8.0 in some twisted way.