Have you ever wondered what the hell possesses good bands to go out on tour with shitty bands usually headlining?  Yes, I know the answer is money but there has to be some sort of dignity left somewhere with these bands I hoped.  Sure, sometimes the other bands just aren’t our cup of tea but other times the bands just blow.  Our latest tour announcement proves just that.  Avenged Sevenfold, Sevendust, Three Days Grace & Bullet For My Valentine.  Three of the four bands scream 14 year old Hot Topic mall goth.  One of these bands has formidable talent and until now had a little bit of credibility in the remnants of the nu-metal genre. 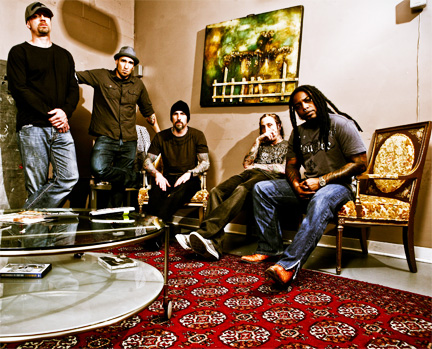 I’ve loved Sevendust for many years and have held an undying allegiance to them but I draw the line here.  The most diehard of Sevendust fan would have to be high or desperate to pick up chubby goth girls who dig grown men with painted nails and guyliner to go to this show.  When Sevendust went out on tour with Shinedown, Chevelle, Puddle Of Mudd (they’re not really a band though) & 10 Years you could make the argument that the card was loaded with talent here even if you’re not a fan of alt rock at all.  When I see this tour I see a bunch of egotistical fucks who don’t know how to keep their mouths shut (A7X), bland radio whores who remake the same chorus into different songs (3DG) and the most generic interpretation of mainstream mall metal I’ve ever witnessed (B4MV).  Will this sell a shitload of tickets?  Dear God yes.  Will it be the smartest business decision Sevendust has made in a while?  Most definitely.  Being an undercard on a full house of 10,000 still beats headlining for at most 1,200 with the likes of Diecast, Taproot, 10 Years, or Nonpoint opening.  However, the question of dignity versus money still has to arise here.

This isn’t the first time this has happened and it won’t be the last unfortunately.  It just makes me lose more and more faith in modern metal everyday.  When a band (Hellyeah)

forms on the basis of making some good old fashioned homebrewed ass kicking metal and then goes on tour opening for fucking Buckcherry, you have to reevaluate the image you created your band around.  When I think about Buckcherry I think about what a coked out hobo would sound (and look) like performing karaoke after gloryholing seventeen men for an eight ball.  I don’t think about the bad motherfuckers from Pantera and Mudvayne opening for them. EVER.  I feel so unmetal leaving before the final note of any show, but I’ve been forced to do exactly that over the past few years on more than one occasion.  Unfortunately it’s not always as easy as Behemoth opening for Job For A Cowboy to avoid a shitty band these days.  It’s usually (hed) P.E. opening for Suicidal Tendencies or something equally as tragic.  Remember The Deftones headlining the Taste Of Chaos tour?  Include any band that has ever had the lapse of judgment and toured with Papa Roach and/or P.O.D. in this list of course.  Seether touring with Nickelback… enough said.  Or what about DevilDriver currently on tour with Cancer Bats or their Thrash and Burn abomination a couple of years ago?  The examples are endless but in every case they’re heartbreaking to all of the metal fans who still drove out to witness such a travesty.

(Edit:  A good point has come to my attention that there is no shame or loss in dignity in putting food on the table.  I fully agree with this statement.  I didn’t expand enough to clarify that the dignity I speak of here is purely from a perception standpoint and not a human standpoint.  You or I would do exactly the same thing if put in the same position and I don’t think of anyone as a lesser person for jumping on such an opportunity.  The dignity I speak of is the attempt to salvage a band image that is still marketable to their target audience.  With internet forums and bandwagon fans everywhere looking for reasons to throw bands away, it’s a pretty delicate process appeasing everybody.  Sometimes it just seems like bands completely disregard this for the short term money in hand.  I apologize for not elaborating more in this rant.)

I apologize if this article seemed more like rant, because that’s exactly what it was.  Will I become the wretched old fuck that one day grows up to write to my e-newspaper columnist robot?  Probably.  All of this shitty ‘metal’ tainting the little bit of good metal that’s left will drive me to the breaking point and I will be left with two choices:  Lurk in the alleys of metal clubs looking to kill these horrible bands or blog about how awful they are until I can hopefully get enough people to join me and rebel against false metal.  The only way to tell the bands you like that this shit isn’t okay is to stop giving them your money on these horrible tours and wait for them to come back with a little bit of dignity next time.  If I wanted to see something that wasn’t remotely metal, I’d take a break from metal and go see the Counting Crows – at least they’re talented.