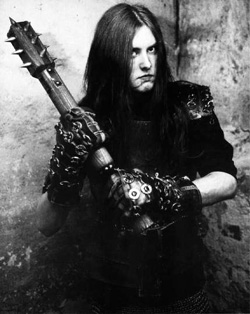 Varg Vikernes of Burzum is easily among the most infamous names in metal, being an icon who is both respected for his musical achievements and frequently reviled for his criminal history and personal beliefs. The upcoming Burzum disc “Fallen” (reviewed here) will be Varg’s second full-length album since being released from prison.

As the release of “Fallen” draws near, Varg answered a series of questions for Metalunderground about the album and how it differs from the previous entry “Belus.” Read on to see his thoughts on letting fans interpret the music freely, mixing metal albums like classical music, and find out what Varg thinks about bands like Bathory and Paradise Lost.

xFiruath: For fans who enjoyed “Belus,” what are the main differences that are going to be heard on “Fallen?”

Varg: It is going to be more dynamic and varied, and also more consistent. In addition to that there are improvements in sound production.

xFiruath: “Belus” dealt with the death of a solar deity. What are the themes dealing with on “Fallen” and are they connected to “Belus?”

Varg: They are not connected to “Belus,” it but deals with a similar theme only in a more personal context; the journey through darkness into the depths (of the mind?) and back into the light. You can read an English translation of the lyrics on burzum.org if you care to. I don’t think it is right of me to give you too much prejudice by telling you exactly what I put into it. It’s for you to enjoy freely.

xFiruath: “Fallen” has an English title, while most of the other albums don’t. Was there any specific reason for the change?

Varg: “Fallen” does not have an English title, it is a Norwegian title and it just happens to be the same in English. As you might know, both English and Norwegian are Germanic languages and we have many common words. “Fallen” is one of them.

xFiruath: I read that you mixed “Fallen” like a classical album. What specifically prompted you to approach it from that angle and what did you think of the finished result compared to anything else you’ve recorded?

Varg: The reason we did it this way was that “Belus” lost most of its dynamics when mastered by a traditional metal music technician. Unfortunately we didn’t have the time to correct that, and to make sure the same didn’t happen to “Fallen” we used another technician and told him to master it as if it was classical music. Why? Well, because Pytten and I did that for all the Burzum albums we mastered. In other words; for all the albums before “Belus.”

xFiruath: Your bio mentions you listening to Paradise Lost and Bathory before even discovering bands like Venom. I’m wondering if listening to those old albums still gives the same feelings as they used to and if they are still a source of inspiration for you?

Varg: To tell the truth I think Bathory reeks, so to speak, and I really don’t understand why I liked it in the first place. Paradise Lost had some good tracks on their debut album (and their demo tape was excellent), and I do still occasionally (i. e. about once every six months) listen to them. Oh, you say I discovered Venom, but just to make that perfectly clear: I never listened to Venom. I wore their t-shirt once because it had the text “black metal,” and I was going to be placed in the spotlight by the police, and I had a very limited selection of t-shirts to chose from. I was selling these shirts in my hometown to make a living, but when the police went to my place to pick up clothes for me they just took what they could find.