WOODS OF YPRES To Embark on North American Tour

The Canadian blackened doom merchants, WOODS OF YPRES have lined up a North American tour in support of the EARACHE reissue of the their acclaimed 2009 effort, WOODS IV: THE GREEN ALBUM. This will be WOODS OF YPRES‘ first full-on tour since mainman David Gold got back from a teaching stint in Kuwait.

Back on the road where he belongs, David checked in to say a few words about his anticipation for the tour

“It’s perfect!  W4: The Green Album was always intended to be a “spring” album centred around themes of rain, renewal, reinvention and recycling of the soul and here we are at the dirty end of winter 2011, having The Green Album re-released on Earache Records and touring the east coast in the very green and hopeful but yet typically still cold and cloudy month of March. It’ll include a special green beer St. Patrick’s Day show in Worcester and a long awaited return to celtic-flavoured Eastern Canada!  So pack a cheap umbrella of which you can plan to get drunk and forget at the venue because us bad-luck-fucks are bringing our no-leaf-clover doom and gloom to your town this March with the black cloud-still-a-followin’ over our heads. Even though we’ve got nothin’ left to lose and no other purpose left in life but to exhibit our cathartic recklessness for your entertainment.

We knew what love was and now, we also know how to be cruel.  A WOODS OF YPRES show is a heavy, heaving slab of both.  It’s poison-medicine for both hardworking modern minds who’ve just given up on their dreams and fellow bleeding fucking hearts who no longer give a shit. Anyways, the timing of The Green Album re-release and The Green Album tour may be the first thing in the history of this band that has ever gone right…so we’re very excited and surprised about the coincidence, because that’s all is really is.  Bring your merch money for a “Wet Leather” t-shirt and a Green Album double-vinyl. See you in March!  Come drink beers, hear the band’s music and watch watch us personally destroy what’s left of ourselves!”

Here are the dates: 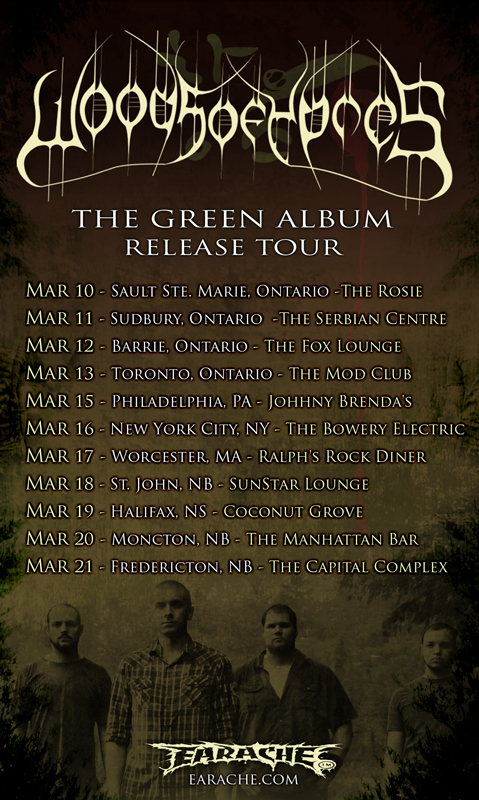 WOODS OF YPRES, has released a brand new music video for the song “I Was Buried In Mount Pleasant Cemetery.” Richly colored and drenched with scenes of mourning, regret and memories of better times, the video perfectly primes fans for the March 22 reissue of WOODS IV: THE GREEN ALBUM, as well as the impending release of WOODS V later this year.

Watch the new video for “I Was Buried In Mount Pleasant Cemetery” here: http://www.youtube.com/watch?v=T9TvcAMENJE

WOODS IV: THE GREEN ALBUM will be reissued by EARACHE RECORDS in North America on March 22nd. For more info, go to http://earache.com/uswebstore

WOODS OF YPRES on MySpace: http://www.myspace.com/woodsofypres