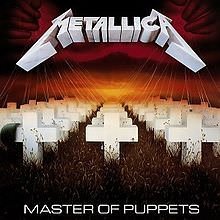 Metallica pierced the ears of metalheads in with their 1983 debut album Kill ‘Em All; a shocking statement of intent with its aggressive, fast onslaught of sonic terror. They hurdled the ‘difficult second album’ phase with ease on the mighty Ride The Lightning, signaling a grander scope of songwriting. These were good albums, full of promising talent that metal listeners hoped would turn into greatness.

When it comes to bands, every so often everything falls perfectly into place. The best of them experience this perfect moment maybe once in their career. That one album where every song is perfectly written, each vocal perfectly pitched with lyrics encompassing and evoking an issue or time. Master Of Puppets was Metallica’s moment.

Released on March 3, 1986, Master of Puppets has never been a ‘grower’ demanding repeated listens nor has it ever been considered a misunderstood work of genius. It is an immediate album. Right from its release it was considered a great metal album and in the proceeding 25 years since its release its reputation has only grown. The songs still hold up as iconic metal tracks, with the title song still being one of the defining anthems of the genre.

The album is still a joy to listen to for me and stands up to repeated listens in its entirety. No song feels like it is dragging, which is quite an achievement considering the track “Master of Puppets” is over 8 minutes long, so too are two others: “Disposable Heroes” and the instrumental “Orion.” In fact, no tracks on Master of Puppets comes in at under 5 minutes. These are epic, well-constructed metal songs.

Drummer Lars Ulrich’s thunderous drumming keeps the energy levels high during the frantic guitar playing. The guitars of Kirk Hammett and lead singer James Hetfield fire giant, fearsome riffs at your ears. By the same token they are not afraid to throw in an acoustic guitar and Hammett’s indomitable solos score each track like a trail of fire. Hetfield’s breathlessly aggressive vocals add an extra layer of immediacy.

Master of Puppets was the last album to feature bass player Cliff Burton, who died a few short months later in a bus crash when Metallica took the album on the road. Burton is still considered one of the great metal bass players, both by his many metalhead fans and ex-bandmates. In the documentary Some Kind Of Monster, during Rob Trujillo’s Metallica audition he played “Whiplash,” with its punishingly fast bass line, and he would play without a pick, something his new bandmates had not seen ‘since Cliff’. On Master Of Puppets, Burton’s iconic bass sound is all over the entire album.

I have been a fan of rock and metal music from a very young age. But the early music I listened to tended to be very hooky and was a neatly structured three-minute track. When I heard Master of Puppets for the first time in my teens it opened my ears to what metal music could do and unleashed a whole new world of heavy music. Songs that could one moment be so sweetly poetic, then devastatingly fast and heavy, switching in a heartbeat and each track was hugely epic. Riffs that were immediate and distinctive but did not carry the whole song could be a good thing.

So today dig out your copy, play it loud and bow down to the Master.

1 Comments on “Metallica: 25th Anniversary of ‘Master Of Puppets’”