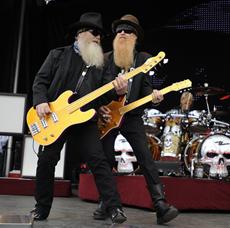 Yet another music-focused cruise is in the works for the Bahamas this winter, headlined by ZZ Top and George Thorogood and The Destroyers.

The Rock Legends Cruise, as it’s being called, will take place on Royal Caribbean’s 3,634-passenger Liberty of the Seas in December and include performances from John Kay and Steppenwolf, The Marshall Tucker Band, Dickey Betts & Great Southern, Foghat, Johnny Winter, Molly Hatchet, The Outlaws, Blackfoot, Pat Travers, and SwampDaWamp.

The five-day sailing kicks off Dec. 1 in Fort Lauderdale and includes stops in Nassau and Coco Cay, Royal Caribbean’s private island in the Bahamas.

The voyage is being organized by the Native American Heritage Association, which is raising funds for self-help programs for Sioux Native Americans living on reservations in South Dakota.

The association says musicians will play in four different on-board venues, including the ship’s Platinum Theater and Studio B, which normally is home to ice skating shows.