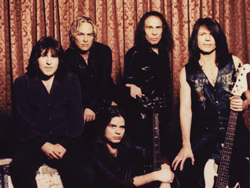 Down bass player Rex Brown, who is also a former member of Texas based heavy metal legends Pantera, has revealed that he has formed a new band with Vinny Appice, the former drummer for Black Sabbth/Heaven & Hell and Dio and guitarist Mark Zavon, who has been a member of Ratt and W.A.S.P. amongst others. Also in the band is lead singer Dewey Bragg. The band has described their sound as a mixture of Black Sabbath, Led Zeppelin and Alice In Chains and plan to begin recording music shortly.