Motley Crue to be Honored at Sunset Music Festival 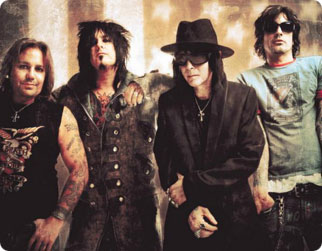 West Hollywood’s legendary THE SUNSET STRIP has announced MÖTLEY CRÜE as the 2011 recipients of the “Elmer Valentine Award” for their contributions to the history of THE SUNSET STRIP. The Thursday, Aug. 18 award ceremony at House of Blues Sunset Strip will kick off the fourth annual SUNSET STRIP MUSIC FESTIVAL, a three-day celebration of music held along the iconic 1.6 mile stretch of Sunset Boulevard (Aug. 18, 19 and 20).

“It’s an honor to be recognized by the Sunset Strip Music Festival,” said MÖTLEY CRÜE drummer Tommy Lee. “It means a lot to us that we are recognized for our contribution to this historic place.”

MÖTLEY CRÜE got their start on The Sunset Strip, as they performed many nights at the Whisky A Go-Go and The Roxy Theatre. The band also filmed their “Kickstart My Heart” video at the Whisky and for a while lived just up the street from the venue on Clark Street, making The Sunset Strip their official home.

“Bursting onto the scene in the early ’80s with a sound and style that blended punk, glam and heavy metal, Mötley Crüe helped re-establish The Sunset Strip as one of the top music destinations in the world,” says SSMF Executive Director Todd Steadman. “The band has forever left their mark on the music industry and The Sunset Strip, and we’re looking forward to celebrating their influence and bringing their spirited energy to this year’s tribute event.”

In addition to the tribute event, the City of West Hollywood will also recognize Mötley Crüe with a special day in their honor.

West Hollywood Mayor John Heilman says, “The City of West Hollywood is happy to welcome the Sunset Strip Music Festival back for its fourth year. The event continues to grow each year, bringing new fans to the boulevard and showcasing The Sunset Strip’s vibrant and vital music scene. We are also happy to welcome back Mötley Crüe, as they return to their rock roots as the honorees for this year’s festival.”

This marks the fourth installment of the award ceremony and the SUNSET STRIP MUSIC FESTIVAL, which celebrates the music and icons that have made an impact on the legacy of The Strip. The event debuted in 2008 with the recognition of Lou Adler, Mario Maglieri and Elmer Valentine, founders of cornerstone Sunset Strip venues The Roxy Theatre, Rainbow Bar & Grill and Whisky A Go-Go. In 2009, Ozzy Osbourne received the “Elmer Valentine Award,” which was thusly named after the passing of original honoree Valentine. 2009 also marked the first closure of Sunset Boulevard in West Hollywood for a music event, with Ozzy Osbourne, KORN and others performing outdoors at the street festival. The 2010 award went to Slash, who also headlined the SSMF’s outdoor stage along with the Smashing Pumpkins. Performers for 2011 will be announced soon.

Thirty loud years in, Mötley Crüe vocalist VINCE NEIL, guitarist MICK MARS, bassist NIKKI SIXX and drummer TOMMY LEE commandeer the rock pantheon as one of the most enduring musical ensembles in history. Mötley Crüe’s rock royalty emanates with as much kickass iridescent relevance in the millennium as it did in the 1980s.

Similar to the 2010 SSMF, this year’s event will feature live performances in all six music venues (Cat Club, House of Blues Sunset Strip, Key Club, The Roxy Theatre, Viper Room and Whisky A Go-Go) on Thursday, Aug. 18, Friday, Aug. 19 and Saturday, Aug. 20. The three-day event will conclude with a street festival on Aug. 20, which includes a street closure from San Vicente Boulevard to Doheny Drive allowing for outdoor stages as well as live performances throughout the day and night in the music venues, a VIP rooftop lounge, beer gardens and interactive experiences on the boulevard.

More details about the Sunset Strip Music Festival 2011, including artist lineup and ticket information, will be announced.