AVENGED SEVENFOLD have signed on to deliver the headlining performance at the third annual REVOLVER GOLDEN GODS AWARD SHOW presented by Epiphone® set for Wednesday, April 20, at Club Nokia in Downtown Los Angeles. The group will close out America’s only hard-rock and heavy-metal award show with a blistering set before heading out on the “Welcome to the Family” tour in support of their current gold-certified album Nightmare. The event will be televised on VH1 Classic on May 28. Tickets are on sale now, via Ticketmaster, http://www.ticketmaster.com/event/2C0046561CD35011.

Fans all over the world can cast their vote to decide who will take home the awards for “Epiphone® Best Guitarist,” “Drum Workshop® Best Drummer,” “Best Vocalist,” “Affliction® Album of the Year,” “Samson/Zoom® Best Live Band,” “Most Metal Athlete,” “Best New Band” and “Eagle Rock® Comeback of the Year.” Online voting is happening now at: www.revolvermag.com and reached well over 150,000 votes in the first week. Be sure to vote for your favorite artist by April 1. The complete list of nominees in each category is listed below. 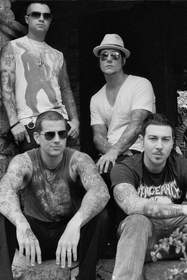 This year, hosting duties for the GOLDEN GODS will be handled by WWE pro-wrestling legend and FOZZY frontman Chris Jericho. Adding to the celebration, the REVOLVER GOLDEN GODS AWARD SHOW will include hard-rocking musical performances by the reunited original ALICE COOPER GROUP (in their first L.A. appearance in nearly 40 years), LOADED (featuring Duff McKagan of GUNS N’ ROSES and VELVET REVOLVER fame), DEVILDRIVER (who will lead an all-star BLACK FLAG tribute set featuring Jamey Jasta and many others), Danish “Elvis metal” group VOLBEAT, Chris Jericho’s band FOZZY and fast-rising metalcore outfit ASKING ALEXANDRIA who will be joined by Sebastian Bach for a rousing rendition of the Skid Row favorite “Youth Gone Wild.” More one-of-a-kind special performances and collaborations onsite honoring both the past and future of heavy music will be announced in the coming weeks.

This year, the “Golden God Award” — which is given to one special honoree a year who embodies the spirit of hard rock and metal — will go to shock-rock godfather Alice Cooper, who is celebrating the reunion of the original ALICE COOPER GROUP and their induction into the Rock and Roll Hall of Fame. This year’s recipient of the first-ever “Ronnie James Dio Lifetime Achievement Award” — renamed in honor of the late, great 2010 Best Vocalist Award winner — is none other than the Sunset Strip’s most iconic band, MÖTLEY CRÜE.