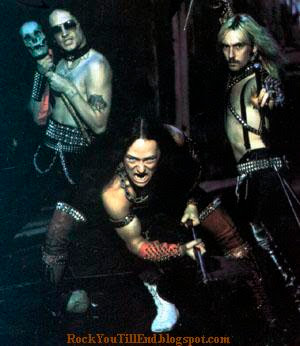 studio. An official release date for the effort has not yet been announced.

Regarding what fans can expect to hear from the next VENOM studio LP, bassist/vocalist Conrad “Cronos” Lant told The Quietus, “The new tracks are tremendous. Basically, if you think of the way [former VENOM drummer] Antton [Antony Lant, who is also Cronos‘ brother] was playing, especially on the last album ‘Hell’, he is a nu-metal drummer and comes from that kind of background. He’s hung ’round VENOM most of his life and it was just good to introduce him to the whole VENOM concept of playing like the way [original VENOM drummer] Abaddon used to play. Basically Abaddon came from a rock background and then basically developed a black metal, speed metal, thrash metal style. The nu-metal drumming is very different and it was a steep learning curve for him. At the end of the day he’s got his own style and he wants to be known for what he’s done and not be in my shadow, which is totally understandable. Some of the guys we had coming to the rehearsals were not ex-CRADLE OF FILTH

When asked how the new songs compare to those off “Hell”, Cronos said, “I would say more like those off ‘Metal Black’. More like our earlier stuff. ‘Hell’ was getting a bit too much like session tracks. Too . . . polished. And polish isn’t a good word for VENOM songs. VENOM songs need to be off the cuff, loose, a little bit thrash. Once you start polishing songs up a bit much you end up going in the wrong direction. There’s a spontaneity about VENOM songs that I’ve always loved. When we’re coming up with new VENOM songs there’s one thing that I always try and keep in mind: ‘Is that kid in his bedroom on his knees playing air guitar and going ‘Yeah! Get in!” You know? I’m not interested in Joe Satriani

sitting there and discussing whether it’s technically correct or not! That’s the last thing on my mind.”

Video footage of VENOM‘s performance at last year’s edition of the Hole In The Sky festival (a.k.a. Bergen Metal Fest XI), which was held August 25-28, 2010 in Bergen, Norway, can be viewed below (courtesy of Demonia’s Blogg).