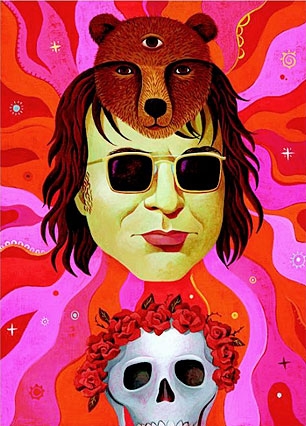 Owsley Stanley, the grandson of a former Kentucky governor, made and supplied the LSD that fueled acid rock and California’s hallucinogenic culture in the 1960s.

Owsley Stanley who made and supplied most of the LSD during the acid rock and hallucinogenic culture in California in the 1960’s has died Sunday at age 76 from an car accident in Queensland, Australia.  The band paid homage to Mr. Stanley in one of their songs “Alice D. Millonaire” after there was a news report that he had been arrested for dealing LSD.  It was stated that Mr. Stanley distributed thousands or even millions of pure LSD and free free at concerts.

He was also dubbed as “God’s Secret Agent A.O.S. 3” (Augustus Owsley Stanley III was his given name).

He had also become an audio expert and  initiated the band’s live recordings, which become their hallmark. He also came up with the Dead’s trademark skull and lightning-bolt logo—originally used to mark music equipment on tours. When “History of the Grateful Dead, Volume 1,” was released its 1973 it was subtitled “Bear’s Choice”—Bear being his nickname. He recorded many other artists, including Janis Joplin and the Allman Brothers.

But he was best known for LSD  and Owsley became the byword for the most potent and plentiful acid available. Owsley also provided the drugs used at “The Electric Kool-Aid Acid Test” in Watts in 1966. It became a popular legend that Jimi Hendrix’s breakout hit “Purple Haze” was named after an Owsley concoction, though Mr. Hendrix denied it. ← ALL THAT REMAINS Runs Down 5 Flights of Stairs During Japan Earthquake (Video)
OPETH, KILLING JOKE, and more Added to SONISPHERE Lineup →