New Noise Attack, a new low-price compilation album with Earache Records, will be released on April 25th.  This new album will be kickass because it’s featuring tracks from some of the rip-yer-face-off bands in metal.

The album features 14 songs from some of the best metal artists plus some previously unreleased tracks that haven’t been released on CD. You’ll be getting this sampler at half the cost of what you’d pay for a new CD!  Listed below are the tracks from the album.

ENFORCER – Midnight Vice
WHITE WIZZARD – Shooting Star *
CAULDRON – All Or Nothing
HOUR OF 13 – Naked Star
THE SOULLESS – Earthbound **
THE BROWNING – Standing On The Edge *
WOODS OF YPRES – I Was Buried In Mount Pleasant Cemetery
WORMROT – Erased Existence **
OCEANO – Weaponized
CEREBRAL BORE – The Bald Cadaver
AND HELL FOLLOWED WITH – This Night Is The Coroner’s
BONDED BY BLOOD – Prototype: Death Machine
SSS – Eat Me Drink Me Burn Me **
DIAMOND PLATE – Waste Of Life (Demo) **

NEW NOISE ATTACK is available to pre-order now on CD, and is also available in a pack featuring the CD plus your choice of any t-shirt from any of the bands featured on the album.  Sweet! 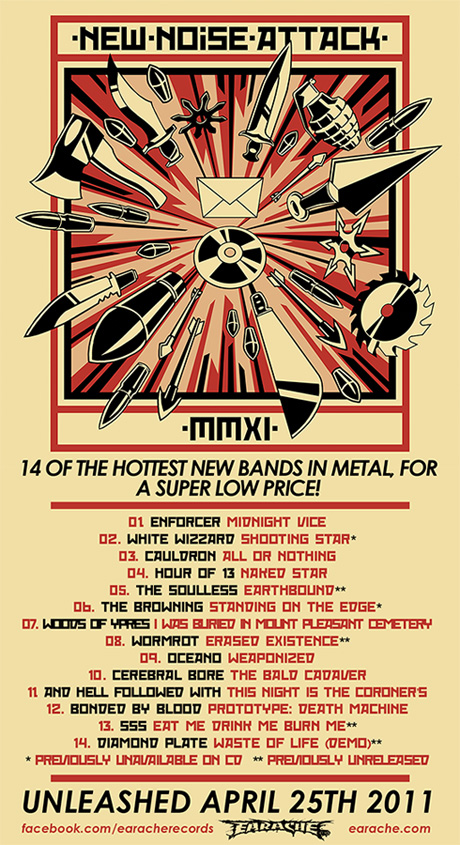