Color me sheltered but I’m just now hearing about this all girl Metallica tribute band called Misstallica.  These chicks hail from Philadelphia, PA and actually sounds pretty good!  They’d originally named their band “Clitallica” but one of their MOMS made them change it! LOL   Lead singer/voc Gigi Gleason has that Hetfield sound happenin’.  Just today I came across this article over on Examiner.com where Eliott Levin had this to say about Gina at their recent gig at Slope Park in Brooklyn, NY:

“…soft-spoken 19 year old channels vintage, 1989 James Hetfield as soon as she steps on stage, both in technical playing as well as the frontman’s famous swaggering, “f*ck ‘em all” attitude and stage banter as seen on various live recordings from that era. Despite her girlish appearance, Gina’s furious, growling vocals drip with testosterone, unquestionably on par with any male singer attempting to cover Hetfield. Furthermore, anyone who has picked up a guitar knows that Metallica – especially the thrashier, earlier albums – is not necessarily beginner material, and it was almost frightening how effortlessly Gina sped through the complex riffs while simultaneously roaring out the spitfire vocals to songs like Ride The Lightning and Disposable Heroes.”

Examiner.com had this to say about her fellow bandmates:

“…three fellow graduates of the School of Rock – bassist Teddi Tarnoff, guitarist Lauren Tsipori, and a thundering, powerhouse drummer in Kaleen Reading. The Philadelphia-based band was spectacularly tight, ripping through Metallica’s rapid time changes, heavy breakdowns, and long, thousand-note solos without missing a beat. For those of us who have listened to Kill ‘Em All and Ride The Lightning thousands upon thousands of times, every nuance of each song burned into our musical consciousness, words can’t fully describe the joy of watching and hearing a practically flawless rendition of a favorite song recreated in such a small, personal live environment.”

You can head over to their Facebook page and check out 2 of their videos and I’ve posted one below, as well. 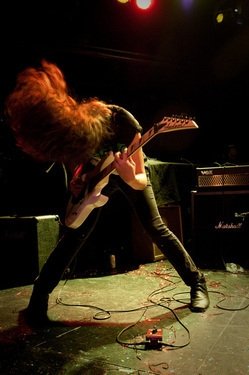