Getting To The “–Core” Of Things

If you can’t tell by now, I am so fucking sick of this whole evolution of shitcore bands.  It gets annoying trying to decipher grindcore from deathcore, metalcore, nintendocore, etc. when the common denominator is one thing: its all shit.  That’s why it’s easier to just lump this whole ‘movement’ into the shitcore category.  Generally, shitcore bands are emulating a band five to fifteen years before them who have already established and perfected their own genre by pissing all over it.  Remember the comparisons of Green Day and The Offspring to Nirvana circa 1995?  You never thought you’d miss hearing Dookie played at every music store, radio, mall and high school parking lot known to man until you’ve caught a whiff of, say, Whitechapel.

Grindcore: I’ll start with possibly my favorite of the –cores because it was pioneered by awesome bands and some awesome bands still spawn from this once in a while.

Mathcore: This is somehow a spawn of grindcore with weird time signatures that often get annoying in even their best bands.  The Dillinger Escape Plan and Protest The Hero are the frontrunners here who are both often hit or miss.  The problem is the abominations this also creates such as Norma Jean and Converge who are more like disorganized noise and less like musically talented.

Metalcore: This is the toughest –core in the game.  Most metal bands that gain any kind of notoriety get thrown in the metalcore pool to fight it out with the garbage out there.  Most of the decent bands are usually along the lines of melodic death metal, it’s always easier to just call them metalcore in the 21st century.  While bands like Sepultura are responsible for the metalcore sound we’re accustomed to, their legacy is just pissed all over now with bands such as Underoath, early Avenged Sevenfold, Escape The Fate and The Devil Wears Prada.

Nintendocore:  This is a terrible genre because there are no precursors to this genre worth their weight in Oprah’s hemorrhoids.  Instead you’re left with bands like Horse the Band and NESkimos and the most complex part of their music is trying to figure out which way you’ll kill yourself.  This is essentially the hipster movement of extreme metal.  These are for the little snowflakes who are too unique to be any other kind of metal and think that being ironically bad makes them just that much more awesome.

Deathcore: This is the heartbreaking genre for me.  The idea behind deathcore was brilliant.  Heavy as fuck, lots of growling and screaming, death metal riffs, blast beats and breakdowns but song structure and, gasp, talent. 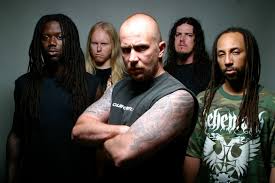 Suffocation and Dying Fetus perfected the genre in the 1990’s before it was desecrated, murdered, skullfucked, burned, raped again and regurgitated into the list of garbage that we have today.  There are the prime examples like Job For A Cowboy, Whitechapel, The Red Chord, Suicide Silence and many many others who keep repeating the same garbage over and over.  It’s common for the modern deathcore fans to claim to like only ‘the first album’ from whichever band they choose, because every album beyond that is exactly the same anyhow.

I hope this helped to teach you a little bit more about the shitcore revolution.  If you research every genre in the shitcore scene, there are always two to three genres like hardcore, punk, death metal, or NWOBHM mixed in as influences and then one band like At The Gates as the bands’ main influence.  That leaves the future open for a lot of amazing things that I almost want to start myself such as:

Discocore: Repetitive choruses shouted loudly over blastbeats and synthesizer  breakdowns played to a hip shaking, finger pointing tempo.  Bring the platform boots and greased hair to the mosh pit motherfuckers!  Imagine a badass drummer such as Frost playing to someone with the talent of Barry Gibb from The Bee Gees as he belts out “Get Down! Get Down! Every Sick Fuck, Get Down!”

Hippiecore: Toe tapping good acoustic guitar solos played at the speed of a light breeze before the voice of Satan interrupts and the music picks up to a breakneck speed.  Oh wait, Opeth already did that on Watershed.  Why hasn’t this phrase been coined yet?

Jazzcore: This has some brutal potential.  Heavy guitars, heavy drumming, but wait for it – trombone, banjo and tuba solos all played at breakneck speed.  You know the hot chick that does nothing on keyboards in these shitcore bands? (I’m talking about you Marta and the chick from Winds Of Plague)  They have the hardest job in jazzcore.  Since they blow hard to begin with, they play background saxophone continually.  Just imagine the orgasm that could be had mixing the cool, drop your panties jazz of Miles Davis with Chuck Schuldiner’s soul raping guitar.

I hope that you too can come up with some new ideas and stop rehashing the same thing over and over again and put an end to this shitcore phase.