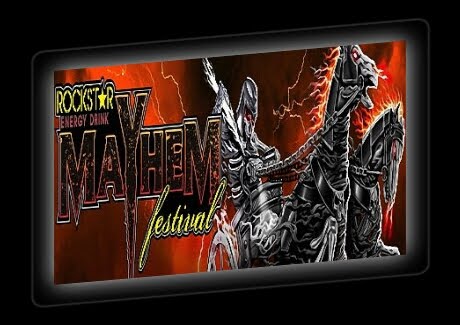 This is the one and only METAL FESTIVAL coming through to YOUR CITY this summer and The 2011 ROCKSTAR ENERGY DRINK MAYHEM FESTIVAL line-up is as diverse and epic as ever! 3 STAGES of non-stop Hard Rock and Heavy Metal featuring bay area greats- Machine Head and Testament.  This years astronomically heavy lineup  will feature Disturbed, Godsmack, Megadeth, Machine Head, Trivium, Testament, Suicide Silence, Unearth, All Shall Perish, Kingdom Of Sorrow, Straight Line Stitch, and Red Fang. The lineup this year TRULY exemplifies the spectrum of Hard Rock and Metal available to fans today, touching on Thrash, hard core, death, doom grind, groove and more each band on the 2011 line up represents their significant subgenre with a unparalleled prowess.

ROCKSTAR ENERGY DRINK MAYHEM FESTIVAL continues to wow in the touring community with its staggering ticket sales in a touring market that continues to be on a decline. The ROCKSTAR ENERGY DRINK MAYHEM FESTIVAL celebrated 360,000 concert goers last year alone.  This year, the first pre-sale in Boise, Idaho, the “Get Off Your Ass” campaign sold out (3,000 tickets) in 10 minutes and the nationwide pre-sale that launched last week has been the most successful to date as stated by tour co-[producer John Reese, “If our pre sale response is any indication, 2011 is the year of METAL.  We have had our biggest pre-sale of all four years.  Fans are very excited about this year’s awesome lineup.”

ROCKSTAR ENERGY DRINK MAYHEM FESTIVAL proves itself as a force to be reckoned with by CONTINUOUSLY pulling in record numbers and growing as a brand, event and touring entity. Beyond the Massive scale of this tour and the absolute importance it plays as a rite of passage for metal concert goers and fans this tour carries a very strong (mandated) ECO- Initiative put in place by tour Co-producer Kevin Lyman of Warped Tour fame is being honored at Club Nokia in Los Angeles on Friday, May 6, 2011.  Kevin will be the recipient of the Stevie Ray Vaughan Award for his dedication and support of the MusiCares® MAP Fund, and for his commitment to helping other addicts with the addiction and recovery process. Lyman will be the recipient of MusiCares’ From the Heart Award for his unconditional friendship and dedication to the mission and goals of the organization.  All proceeds will benefit the MusiCares MAP Fund, which provides members of the music community access to addiction recovery treatment regardless of their financial situation.

JAGERMEISTER Battle of The Bands Winner