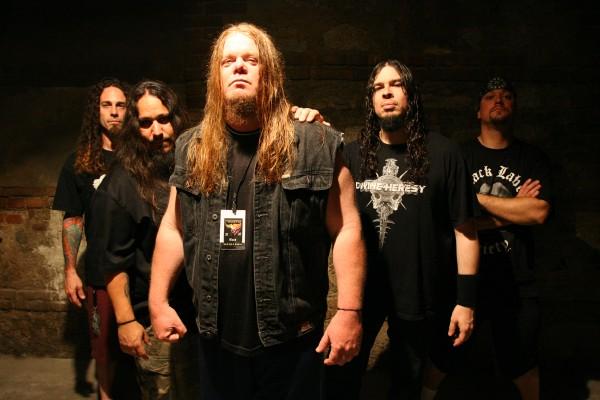 Forbidden’s drummer Mark Hernandez won’t be able to hit the gig with the band’s upcoming show this Thursday at Inferno Fest in Norway but…..Gene “The Atomic Clock” Hoglan (ex-Dark Angel, ex-Strapping Young Lad, Fear Factory, Dethklok) will be gettin the hookup for FORBIDDEN.

States drummer Mike Hernandez:
“It is with true disappointment I inform the fans and friends of FORBIDDEN that I will be unable to play both of the headlining festivals this coming weekend. I have a personal family obligation I must attend to. I want to put to rest any thought that I am leaving the band, and will hope to see the faces I miss now later on in the summer touring season. I am very honored to have the mighty Gene Hoglan stepping up to help out and do these shows for me. Without a doubt, everyone in attendance will get a 110% Forbidden show!”

Gene Hoglan adds:
“Hey folks, I’m real excited to be heading over to Europe with my bro’s in FORBIDDEN this week for their appearances at the Infernofest in Oslo, Norway and the Metropole Ruhr Fest in Bochum, Germany. We’ve been great friends for eons, and Craig [Locicero, guitarist] has been my absolute brother since we toured in Death together way back when. Not to mention that I’m a seriously diehard fan of theirs. For me, each one of their records was better than the last, and that’s really saying something. From Forbidden Evil to the astonishing monument that is Green, I’d be hard-pressed to name another band who made the unexpected turns of their evolutionary process sound so damn righteous the way these guys did for me. I’m also real proud to be attempting Mark Hernandez’s killer parts off their roaringly brilliant Omega Wave. Savage drumming on their latest, indeed. My work is definitely cut out, without a doubt. And I know Mark is excited to return as well. If you are headed to the Infernofest or the Metropole Ruhr Fest (that just rolls right off the tongue, doesn’t it?), I’m looking forward to ripping some evil FORBIDDEN metal for you.”

FORBIDDEN’s tour launches on June 9th in Hollywood. Ticket prices will be between $10 – $15 in every tour market. Support will come from Revocation from Boston, Massachusetts, White Wizzard from Los Angeles, and Havok from Denver, Colorado. Tour dates can be viewed here.