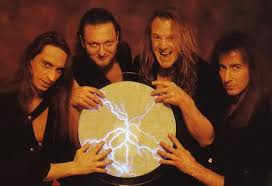 Gamma Ray is a power metal band from northern Germany, founded and fronted by Kai Hansen after his departure from Helloween. Hansen is the current lead vocalist, guitarist as well as the chief songwriter. The band is known as one of the most prominent bands of the German heavy metal scene. Despite having many lineup changes in their early career, the band’s lineup has remained stable since 1997.

In 1988, after four years with Helloween, guitarist and songwriter Kai Hansen decided, for reasons that are still the subject of much debate, to leave the band. Hansen claimed that Helloween had become too big for him to handle, although the group’s troubles with financial issues and the record company most likely played a part as well. He proceeded to do some studio work with Blind Guardian and in 1989 decided to form his own project with long-time friend Ralf Scheepers from Tyran Pace. This two-man project grew into a four-man band with the addition of Uwe Wessel (bass) and Mathias Burchardt (drums). Thus was Gamma Ray born, bearing a sound understandably close to that of Helloween.

The original line-up released the album Heading for Tomorrow in February 1990, and later that year the Heaven Can Wait EP with new guitarist Dirk Schlächter and new drummer Uli Kusch. 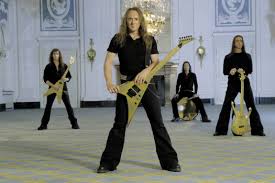 In February 1991 the band began rehearsing for the recording of their second album in a small, remote house in Denmark. With some brand new songs written, Gamma Ray entered the studio under the supervision of producer Tommy Newton and produced their second album Sigh No More, which was released in September 1991. The style differed vastly from that of Heading for Tomorrow, featuring darker lyrics as a result of the Persian gulf War that was raging at the time. A 50-date worldwide tour followed.

After the Japanese tour at the beginning of 1991, Gamma Ray underwent another personnel change: the rhythm section (Wessel and Kusch) left due to a personal disagreement and were replaced by Chris Henry (bass) and Thomas Nack (drums), both from the Hamburg band Anesthesia. The band also began to build their own studio, so work on their new album didn’t start until 1993. The album Insanity and Genius was released in June 1993, with a style which was closer to that of Heading for Tomorrow than Sigh No More. In September 1993 Gamma Ray, along with Rag, Helicon and Conception, embarked on the Melodic Metal Strikes Back tour. The tour contributed to the release of the double CD The Power of Metal, and the videos Power of Metal and Lust for Live, in December. 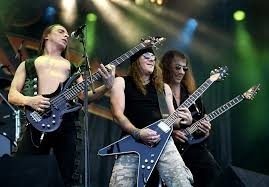 More changes in the lineup were to follow. Scheepers lived quite far way away from Hamburg, meaning that the band could only rehearse during the weekends, which was preventing progress with the new album. Since Scheepers submitted his application for the job of vocalist for Judas Priest, and he had a good chance of getting the position, Hansen asked him if he really felt that staying with Gamma Ray was the right thing to do. At the same time Hansen and Schlächter began to compose songs for the new album “Insanity and Genius”, which further strained the relationship. Hansen and Scheepers decided that it would be for the best if Scheepers left the band, so, with no hard feelings on either side, Scheepers left Gamma Ray. After failing to be recruited for Judas Priest, Scheepers started his own band, the acclaimed Primal Fear. Hansen then began to search for a new vocalist but, due to demand from friends and fans, took on the guitar-vocal duties himself as he had for Helloween’s first EP and album.

In 1995 the fourth album, Land of the Free, the first to feature Hansen on vocals, was released. The album was universally praised by critics. The tour following the album, Men on a Tour, brought the recording and release of the live album Alive ’95 in 1996.

Soon after, there was yet another major lineup change. Jan Rubach and Thomas Nack both left in order to return to Anesthesia, and in came new drummer Dan Zimmermann, who later formed the band Freedom Call. Schlächter wanted to drop the guitar and pick up the bass duties because that was his original instrument, as can be seen on the earlier Heading for the East video when he and Wessel switch instruments for a few songs, and Schlächter performs a bass solo at one point. Henjo Richter came in to fill the second guitar spot. This lineup survives to this day.

Work started on the next full-length album, and 1997 saw the release of Somewhere Out in Space, which marked the beginning of the band’s thematic concentration on space. The album featured the hit “Valley of the Kings”. After two years of touring came the album Power Plant, which was a continuation of Somewhere Out In Space‘s lyrical approach, but a new direction musically. The album was highly acclaimed throughout the world.

The time came for a “Best Of…” album, and Hansen decided to do things differently: he let the fans decide by voting on their website for their three favorite songs on each album, then the band went back to the studio to re-record the old classics on the first three albums and made remixed versions for the songs on the later ones. Blast from the Past was the name chosen for this double album.

After a break of one year where Hansen concentrated on his side project Iron Savior, the band was ready for the recording and release of the album No World Order, which was stylistically similar to NWOBHM bands such as Iron Maiden and Judas Priest. Again the album was highly praised and the No Order World Tour saw the band visiting dozens of European countries and Japan. After resting from the tour, the band went on with the Skeletons in the Closet tour, which saw the band performing songs that they never or rarely played live before. Once again, the setlist was voted by the fans on the band’s website. Only a few shows were played on this tour but two of those were recorded for the live album Skeletons in the Closet. 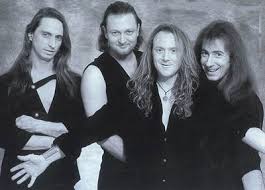 Kai Hansen and Henjo Richter also participated in Tobias Sammet’s project Avantasia, on both The Metal Opera and The Metal Opera Part II, along with various other musicians including Hansen’s former bandmates from Helloween, Markus Grosskopf and Michael Kiske.

A live DVD, “Hell Yeah – The Awesome Foursome (And The Finnish Keyboarder Who Didn’t Want To Wear His Donald Duck Costume) Live in Montreal” was recorded on May 6, 2006 at Le Medley in Montreal, Quebec. The setlist contained songs drawn from all of their albums up to Majestic (excluding Insanity and Genius) and also a cover of the Helloween hit I Want Out. The DVD finally saw release on November 4, 2008. It entered the German media control charts at #9 and the Swedish charts at #1, according to the band’s official website.

In recent years Gamma Ray have made use of touring keyboard players to fully augment their sound in a live environment. Axel Mackenrott of Masterplan fulfilled these duties in the past and was followed by Eero Kaukomies, a Finn who also plays in a Gamma Ray tribute band named Guardians of Mankind. His bandmate Kasperi Heikkinen (currently of Amberian Dawn) also played on part of the Majestic tour in 2006 following an injury to Henjo Richter. On their most recent “To The Metal” tour Kasperi Heikkinen replaced Henjo Richter once again for shows scheduled in Germany and Czech Republic in March 2010. Richter was hospitalized on March 16, 2010 due to retinal detachment. Heikkinen also shared stage with fellow axemen Hansen and Richter making “a three guitar special” for the encore numbers at the Nosturi club in Helsinki, Finland on March 29, 2010.

Land of the Free II was released in late 2007 as a sequel to the hugely successful Land of the Free album. To promote the album, Gamma Ray were the “very special guest” on Helloween’s Hellish Rock 2007/2008 World Tour, on some shows along with the band Axxis. For the final encores of the evening, Kai and members of Gamma Ray joined Helloween to play a couple of songs from when Kai was in the latter band. Kai would also regularly join Helloween co-founder Michael Weikath at center stage to the delight of fans of both bands.

To The Metal is the tenth full length studio album by Gamma Ray. It was released on January 29, 2010.