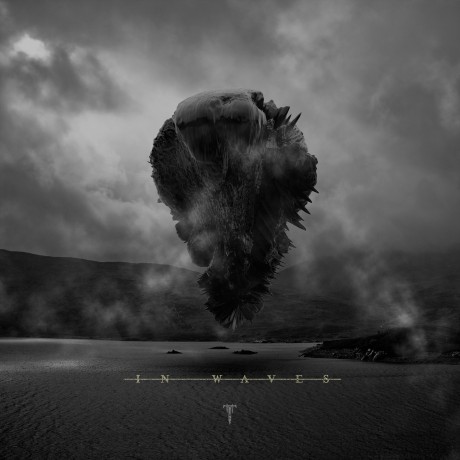 I kind of feel like it is my duty to review this album and give it a fair shot.  Trivium has become one of the easiest bands to hate and oh so many people have jumped on that bandwagon.  Unfortunately most people who review albums are on the elitist side of the fence, and finding an elitist who remotely likes Trivium is like trying to find a white person who likes Tyler Perry.  So I’ve sat on this album for the past ten days and listened to it at home, while at the gym and while driving home from a show to make sure I stil liked it.  Once upon a time I hailed The Crusade as a masterpiece; however after enough listens I was pretty much sick of it and was on ‘too much homage to Metallica going on’ wagon.  Now it’s an album I listen to maybe a couple of times a year at best.  Shogun was an album that I listened to a few times but nothing about it jumped out at me as memorable or something I’d ever be in the mood to listen to.  In Waves has more staying power to me then any of their other stuff except for Ascendency, so it is a nice return to form of sorts.  The songs are tighter and more compact than ever before and the collective musical talent in the group is put to good use with more straightforward in your face songs instead of looking for places to show off Matt and Corey’s skills in randomly placed solos.

I will say that the special edition is the way to go here.  Three of the extra five tracks make the album a better experience to me.  Obviously one can never go wrong with a Sepultura cover (‘Slave New World’) that is stuck in as track 18 which automatically makes it a sell for me.  In Waves has a distinct Trivium sound to it, but at times goes a little bit overboard with the hooks that are begging for mainstream attention.  The album starts with the ‘Capsizing The Sea’ intro which isn’t anything special but it’s definitely necessary to prevent the album with the screaming of “IN WAAVVVESSS” which opens the next song, ‘In Waves’. Both the title track and the following ‘Inception Of The End’ are about a 50/50 mix of Matt Heafy’s trademark scream/clean vocal tradeoff.  Both are going to appeal to the type of Avenged Sevenfold/Atreyu loving crowd generally found at the Rockstar Mayhem festival they’re currently on.  ‘Dusk Dismantled’ grows some major balls and makes me think they got some pointers from Dååth’s Eyal Levi on quality songwriting while the drums were being recorded in his home studio.  It’s the type of song that would be well received by most of the metal world so long as you never told them who the artist

was (Goddamn you ‘elitists’).  ‘Watch The World Burn’ is mostly clean and more reminiscent of something found on The Crusade.  Although it’s a bit repetitive it’s a catchy enough track to not neglect entirely.  ‘Black’ is one of my favorite tracks to be found here.  It’s one of those unexplainably good songs because it stands out from the rest in a way that makes you want to pump your fist as you yell ‘BLACK!’  ‘A Skyline’s Severance’ feels like a continuation of ‘Dusk Dismantled’ when it comes to being heavy and more melodic death metal sounding than the pseudo thrash/metalcore mix they have pretty much firmly planted themselves in over the years.

Nevermind the ‘Ensnare The Sun’ interlude here, because well I just don’t care. It seems like halftime for the album and it’s not needed, so let’s move on to ‘Built To Fall’.  This song feels like it was written for one reason, radio attention.  It’s fairly cheesy and the vocals are clean enough to throw into the Bullet For My Valentine/Avenged Sevenfold mix of ‘edgy’ songs to be pillaged and raped on modern rock radio.  Sure, this song is still better than what most of the rest of the radio has to offer, but it does detract some credibility from the overall feel of the rest of the album.  ‘Caustic Are The Ties That Bind’ feels like a total return to the Ascendancy era.  Heavy, yet interpretable screaming followed by a clean chorus with a soft gooey center and then hard, crunchy edges just like the week old cherry danish from your local 7-11.  Yup, this is officially a metalcore song.  If that was the cherry danish, ‘Forsake Not The Dream’ is the cheese danish along side of it.  Overall it’s a bit harder than the cherry danish and the soft core is gone this time for a crunchier but not as tasty core in the middle.  I also just realized how sad it is that I can compare the traditional metalcore song to 7-11 pastries down to both of them wanting you to believe their products are fresh.  At least I’ve never seen a dirty hobo scratch his shit stained ass and wipe it all over a metalcore album for added flavor.  Actually, on second thought, Bring Me The Horizon has released three albums that fit that description.  Okay, I digressed, I apologize.  ‘Drowning In Slow Motion’ can also be thrown into the cheese danish mix as it mixes their 2005 era screams with the Crusade era clean choruses.  ‘A Grey So Dark’ does very little for me since it’s a bit whiny and along the commercial there’s an elephant in the Goddamned room lines that ‘Built To Fall’ is burdened by.  ‘Chaos Reigns’ makes up for the preceding failed bonus track because it’s both heavy and catchy and unrelenting.  ‘Of All These Yesterdays’ is an acquired taste that some people may love since it sounds a bit like the retarded child of something like ‘Dying In Your Arms’ mixed with System Of A Down’s ‘Soldier Side’ for the first two minutes before borrowing a little bit of punch from what could be a Machine Head chorus and then fizzing out as quickly as it gained momentum.  ‘Leaving This World Behind’ is the third of the minute and a half or so interludes here, which is by no means anything special but it does a fair enough job at closing the album out.  ‘Shattering The Skies Above’ is rehashed from the ‘God Of War’ soundtrack and it’s still an awesome song with plenty of blistering drums and guitars to be had here.  I’m definitely happy that it saw the light of day aside from the soundtrack.  The special edition ends with Sepultura’s ‘Slave New World’ and you’d have to be pretty awful to fuck up one of their classics.  They do a nice job with it though and embrace the heaviness of it like they’re supposed to.

Just like every other album Trivium has ever released, they are giving the haters plenty of ammunition to fire back at them with the two watered down songs and the sheer predictability of quite a few more.  However, when played as a whole from top to bottom, it’s honestly a good listen that I won’t get sick of nearly as quickly as some of their other stuff.  For the core (no pun intended) group of Trivium fans out there, they will be pleased with this effort.  For the ‘my indecipherable obscure black metal is the only real metal out there’ douchebags, this is going to be yet another punching bag for them.  In a nutshell, at the end of the day this album is not going to change your perception or opinion of the band.  I guess that makes it a good thing they’re not a band that I absolutely loathe.  7/10