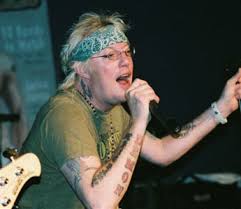 Lane was born as John Kennedy Oswald on February 1, 1964 in Akron, Ohio, the youngest of five children of Robert and Eileen Oswald and youngest brother to Marcy, Eric, Michelle, and Victoria. Having an older brother (Eric Oswald) as an accomplished guitarist already, and having learned to play drums at the age of four with his brother guiding and teaching him, he was then introduced to bands by his sister Vicky (Ley) and his parents, Bob and Eileen. Lane played drums under the name “Mitch Dynomite” in clubs by age 11 (“Mitch Dynomite” is listed as the drummer in the credits for Warrant’s Latest and Greatest CD). Throughout the years, Lane would sometimes jump behind the kit to play with his band, and he has played the drums in various formats and gigs.

By age 11, his older siblings had left for college or marriage except Vicky. Between his parents and his sister, he made the rounds as an amateur protege’ drummer, making quite a name for himself. Not a shy youngster, he took over the family home inside and out with his drum equipment and fellow musicians until he graduated from high school. Although he chose a path of the most difficult nature, he was a terrific football quarterback and had been offered scholarships to various colleges. He worked throughout high school to acquire his own drum equipment, setting a fine example to his friends and co-workers that he was not afraid to do anything for his dream of becoming a song writer/entertainer.

It was at this time that Jani realized his true desire was not only to play in the band but to actually sing his own songs up front and not hidden behind a drum kit.

Graduating from Field High School in Mogadore, Ohio in 1982, Lane joined the band Cyren, featuring vocalist Skip Hammonds, guitarist JohN Weakland, bassist Don Hoover (and later, Rusty Fohner), with Lane on drums. After making a name for himself and his band in Ohio, he relocated to Florida in 1983, Lane played drums for Dorian Gray, before forming Plain Jane (1985) with future Warrant bandmate Steven (Chamberlin) Sweet. It was at this time that Lane adopted the stage name “Jani Lane.” Jani got the name by his German grandparents’ pronunciation and spelling of Johnny as “Jani.” They said it as Yay-nee and that stuck. While playing drums with Dorian Gray, Jani began vocal training with Central Florida vocal coach/trainer Ron Feldman (who remains friends with Jani and his immediate family to this day). Feldman introduced Jani to Creative Engineering, Inc. in Orlando where he worked as a programmer of the animatronic character, Dook LaRue, the drummer for the Rock-afire Explosion. His vocal debut was performed at Fern Park Station in Fern Park, Florida.

Lane and Sweet later relocated to Los Angeles, California, where they took various odd jobs to survive. Struggling to make ends meet as a musician, Lane resorted to working in a pornographic video warehouse.

By 1986, Plain Jane had become a regular feature in the L.A. club circuit. Erik Turner, who had founded Warrant in July 1984, was impressed by Plain Jane’s songwriting and vocal performance, and invited Lane and Sweet to join his band.

Lane also became quite fond of cooking and experimenting with ingredients to make his now famous “Mexican Lasagna” among many other dishes.

After generating notoriety on the club circuit, Warrant began to attract the attention of record labels. Following an abortive deal with A&M records over a contribution to the soundtrack for the motion picture Bill & Ted’s Excellent Adventure, the band signed with Columbia Records. The Columbia deal came via the partnering of Warrant and manager Tom Hullet (known for working with The Beach Boys, Elvis Presley, and others). Tom became Jani’s mentor and friend until his death from cancer in 1993. As lead vocalist with Warrant, Lane wrote three Top 40 hit singles: “Heaven,” “Down Boys” and “Sometimes She Cries” for Warrant’s debut album Dirty Rotten Filthy Stinking Rich which peaked at number 10 on the billboard 200. and another three Top 40 hit singles: “Cherry Pie,” “I Saw Red,” and “Uncle Tom’s Cabin” (the intro to “Uncle Tom’s Cabin” was performed by Lane’s older brother Eric Oswald; see Warrant) for the second album Cherry Pie which peaked at number 7 on The Billboard 200. Lane also co-wrote and performed with Warrant the song “The Power” in the 1992 movie “The Gladiator.” Lane also had an unreleased project titled “Jabberwocky” which has become an underground fan favorite world wide. Lane left Warrant in March 1993, following the release of the band’s critically acclaimed record Dog Eat Dog which peaked at number 25 on The Billboard 200. He returned to the band in September 1994, helping the band to secure a new record with Tom Lipsky of CMC International. The band then recorded Ultraphobic in 1995, Belly to Belly in 1996, Greatest & Latest in 1999 and a cover album Under the Influence in 2001.

Due to personal and business disagreements, Lane left Warrant in 2004. In January 2008, the band’s agent, The William Morris Agency issued a new photograph of the band with Lane prominently featured, confirming his return to the band. It was the first time that all original members had been in the band since 1992. The band’s first show with all original members was in May 2008 in Nashville. Warrant then performed a series of shows during the summer of 2008, but by September 2008, Warrant and Jani agreed to move forward separately, due to “too much water under the bridge.” Warrant and Jani both continued to perform Lane’s compositions live and Jani continued to write for himself and other artists.

Jani has lent his vocals to numerous tribute CDs during the beginning years of 2000 and released his solo effort, Back Down To One in 2003 in Europe and (2006) in the US on Immortal/Sidewinder Records. Lane also has had success with the VH1 Metal Mania Stripped discs where an acoustic version of “I Saw Red” is on disc 1, and an acoustic swinging version of “Cherry Pie” is on disc 2.

Lane became involved in acting in the early 1990s. He made a brief appearance in Caged Fear, and also appeared in High Strung in 1991.

Between 1997 and 2000, demos of Lane’s solo material began surfacing on the Internet, with some bids on eBay reaching an estimated $US100.00 per copy. The project, titled Jabberwocky, represented a significant musical departure from Lane’s previous work. The CD has never been officially released.

Lane’s official debut solo album, Back Down to One, was released on June 17, 2003 through Z Records. It carried a “power pop” sound which was more closely aligned with the sound of Warrant than the unreleased Jabberwockyproject.

In August 2004, Lane withdrew from the Bad Boys of Metal tour after only 8 shows.

In fall of 2004 Lane contributed the lead vocals for the first ever theme song to a novel, The Devil of Shakespeare, by author Billy McCarthy, along with JY from Styx, Ron Flynt 20/20, Chip Z’Nuff of Enuff Znuff.

Keri Kelli and Lane wrote a song for Alice Cooper, titled, “The One That Got Away.” It was recorded by Cooper on his 2008 record, “Along Came A Spider.”

Lane has also finished work on his side project, Saints of the Underground. This project also consists of Bobby Blotzer and Robbie Crane (both from Ratt), and Keri Kelli (from Alice Cooper). Their album, Love the Sin, Hate the Sinner was released on April 22, 2008.

In the summer of 2010, Lane went on tour with Great White, filling in for singer Jack Russell, who was recuperating from surgery after suffering internal complications.

Lane was found dead at a Comfort Inn hotel in Woodland Hills, California on August 11, 2011, at the age of 47