Here we go. This is an album that has really got me going. At first listen, I found comparisons with Gary Moore, both in vocal, and guitar playing during Gary’s latter blues period. In reality, you get two albums in one with Ruby Electric. The first six tracks are studio recordings, and the last eight are recorded live

The first track, Let The Love In, is a ballsy stomper, which is a great choice as an opener. The interaction between Sayce, and keyboard player Fred Mandel, work well on this one. Reminds me of Bonamassa and Sherinian from Black Country Communion.

Set Us Free, brings the tempo down slightly, but not too much as so to sway you away from the album. This track shows what Sayce can do as a guitar player, rocking it up, as well as bringing it down when needed.

Now to the ballad, Daydream Tonight. Recorded in one take, and in my opinion, worthy as a first single choice. Works well as a power ballad, without going too over the top.

King of New Mexico, has Sayce handling vocals, guitar, and bass duties, and man, how he pulls it off. As the album progresses i’m getting more and more of a BCC feel about it.

The second ballad, Were You There, has a Nazareth influence about it, but with better vocals (no offence to Dan McCafferty Nazareth vocalist). Starts off slow and moody, and then builds well into a decent power ballad ending.

The title track, Ruby Electric, is only a short track 1:49 but has a lot packed into it. Very Cream influenced, with a hint of Lenny Kravitz.

Now we get to the live section of the album. eight tracks, showing how well Philip Sayce can perform his tracks in a live enviroment.     One Foot in The Grave, Powerful Thing, Slipaway, Alchemy, Take You Away, Angels Live Inside, and Cinnamon Girl/I Want You, mainstays in his live sets are well worth getting this album for. There will be a new live album coming soon, and it will be interesting to see which tracks from Ruby Electric, he chooses to include live. 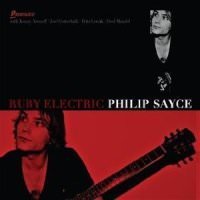 Sayce was born in Aberystwyth, but family moved to Canada when he was two years old, and he grew up in Toronto. His parents, Kenneth and Sheila, listened to music by Eric Clapton, Ry Cooder and Dire Straits, among many other artists. His parents’ love of music inspired his love for the guitar, and he also learned to play the piano and other instruments. Sayce was fifteen years old when he played in his first band. Sayce and his best friend, drummer Cassius Pereira, played in bands together throughout high school at Brebeuf College School, holding band practice in their basements. Sayce’s style is strongly influenced by Jimi Hendrix and Stevie Ray Vaughan, whose untimely death in August 1990 greatly affected the young guitarist.

Sayce began playing in Toronto clubs at the age of sixteen. He quickly became a regular fixture on Toronto’s bar-scene. One of the clubs Sayce frequented was Grossman’s Tavern in Toronto, known for its famous jam sessions with artists such as Robbie Robertson, Stevie Ray Vaughan, Bob Dylan and Jeff Healey. His other musical influences include B. B. King, Albert King, Albert Collins, Buddy Guy, and Robert Cray. Sayce joined Healey’s band in 1997 and toured the world for three and a half years, playing such places as Baden Baden, Germany, Brazil, Finland and the prestigious Montreux Jazz Festival in Switzerland.

Sayce quickly gained notoriety as a teenage axe-slinger through his regular gigs at Toronto clubs, and he gradually developed a solid fan base.

Sayce moved to Los Angeles to expand his music career. He soon landed a gig with Uncle Kracker and toured with him for eighteen months. With Uncle Kracker, Philip appeared on New Year’s Rockin’ Eve, Regis and Kelly, The Tonight Show with Jay Leno, and The CBS Early Show.

Sayce also wrote the music for the 2002 short film, Cockroach Blue, which he also starred in. It was produced and directed by award-winning Robert Crossman. The film was shown at the 2003 Woodstock Film Festival and received popular acclaim.

In the fall of 2003, Sayce unexpectedly met John Shanks at an impromptu jam session in the amp department at Westwood Music in Los Angeles. Coincidentally, just a week before, two-time Grammy award winner Melissa Etheridge had mentioned to Shanks that she was looking for a guitar player and was thinking of trying somebody different. Shanks referred Sayce to her and in December 2003, Sayce joined Etheridge and her band for her Lucky Tour. Sayce also appears on Etheridge’s Lucky CD and the Lucky Live DVD, released in September, 2004, Melissa Etheridge Greatest Hits: The Road Less Traveled released in 2005, The Awakening” released in 2007, and A New Thought For Christmas released in September 2008. He also performed on Etheridge’s Oscar winning song “I Need To Wake Up” from the Al Gore 2006 documentary film An Inconvenient Truth. Sayce appeared with Etheridge at the 2007 Academy Awards, Live Earth in 2007, The 2005 Grammy Awards as part of a tribute to Janis Joplin (along with Joss Stone), and at the 2008 Democratic National Convention in Denver, Colorado.

Sayce released his album Peace Machine, on Provogue Records in 2009. He released a second album Innerevolution in Europe, in May 2010. In July 2010, Philip Sayce supported the legendary ZZ Top in Europe and in December 2010, he supported Deep Purple on their French dates.

← Upcoming Shows in CA: THE CONTORTIONIST, TEXTURES, UNDEROATH, TESTAMENT, and More!
At The CAN Club Sept. 17th: TRT, STRAIGHT FROM THE GRAVE, OKT, SLUT MACHINE & SKINFLICK →