It’s so nice to get an album from the technical death metal genre that is worthy of both reviewing and listening to over and over again.  All too often I get overly excited about a technical album of any sort, but after the nostalgia and the guitar skill wankery wear off, I’m bored with it.  Usually it’s the same ingredients that make up every technical album:  try fitting as many intricate riffs into every song with complete disregard to vocals or lyrics and fill the rest in with blast beats.  Sure, there are plenty of exceptions to the rule, but in general it’s all kind of like goth kids; they try so hard to be unique that they all start sounding exactly the same. 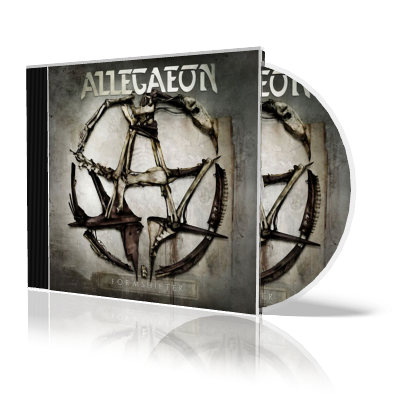 With Formshifter, Allegaeon inject a breath of fresh air to the genre.  It’s a ten track, fifty two minute assault from top to bottom that shows the finer points of what technical death metal has to offer yet still reaches the other end of the spectrum that musically feels like a bit of homage to bands like Metallica, back when they were still epic of course.  The boys from Fort Collins, Colorado (yes, the same place that supposedly hosts the pube fair in the ‘Scott Tenorman Must Die’ episode of South Park) created an album with the listenability of a Cynic album but with the heaviness of a Meshuggah album.

‘Behold (God I Am)’ is a wonderful seven minute opener that isn’t a second too long.  Outside of the solos, the guitar work is very much Ride The Lightning worthy here.  ‘Tartessos: The Hidden Xenocryst’ is one of the catchiest tech death songs I’ve come across since their 2010 release Fragments Of Form And Function.  ‘A Path Disclosed’ doesn’t go over the top either, but provides a solid foundation for the immediate beast that is ‘Iconic Images’ although the last two minutes taper off into more or less an intermission for the middle of the album.  I give props to frontman Ezra Haynes for staying true to his vocal style consistently here as well.  While his voice is nothing remarkable in terms of originality like that of a Jens Kidman it is powerful and consistent like that of Ben Falgoust.

After the brief intermission, ‘Twelve’ and ‘The Azrael Trigger’ go right back for the throat with every bit of the catchiness and power that established acts like Arch Enemy bring.  ‘From The Stars Death Came’ is rock solid and a perfect example

of just how far the band has come in terms of maturity since their last album.  While the last album was fantastic in its own right, it didn’t give off the vibe that every idea put on paper was accurately recorded.  This time around, they’ve nailed it.  Speaking of which, ‘Timeline Dissonance’ is the closest resemblance to a song like ‘Biomech’ on the last album, this time it’s just exponentially more crushing and complete sounding.  Since relentless was apparently the common trend with this album, it’s fitting that the song blows right into ‘Formshifter’ which is an inevitable headbanger from start to finish.  The album closes out with ‘Secrets Of The Sequence’ which starts off much like album begins, a beautiful intro that would make bands twenty years prior envious before delivering the deathblow.  The song actually carries a lot of the power of a band like Devildriver which shows just how much of a future the band has.

It’s safe to say this will be one of the most brilliant albums released in 2012 and probably tops amongst anything that the technical death metal genre has to offer unless The Faceless are sitting on pure gold with their long awaited third album.  I’m just glad that there was an album that could stave off the generic, incomplete riffs that plague tech death and put together a masterpiece in the genre.  This is definitely every bit of a 9.5/10 album and a must own for metalheads.  Don’t let the genre scare you, it’s a keeper even if you usually cringe at the thought of anything that is lumped into the cesspool that is the sub-genre labeling trend right now.