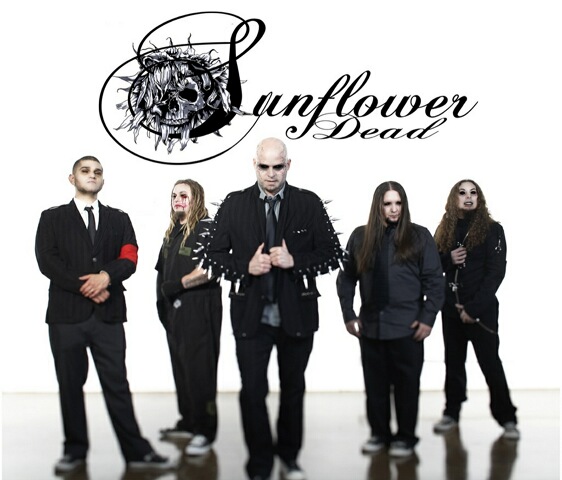 Over at VampireFreaks I caught up with Jamie of Sunflower Dead (previously of DROID).  On August 21st they will be releasing their debut self-titled album.

JG: With all of the different bands you guys come from, when you go in to start the record, did you say we’re going to take a little bit of each member’s style, or do you just leave everything at the door and say “This is Sunflower Dead, this is something completely new.”?

JT: It’s definitely completely new, but you can hear everybody’s personalities and stuff in the music for sure. If you know anything that we’ve done in the past, you can hear the influences from each member putting their part in it. It kind of made us what we are. Like Jim had a few songs together before I even started playing with them and he was showing me riffs and parts he was working on. By the time we were actually finished with the songs they were completely different. We all put our two cents in and made them the songs that they are now.

JG: How did you meet up with the Fear Factory guys?

JT: We were managed by the same management company as them in the past so I just had relationships with them. I’ve known Christian for a while, he’s a friend. I knew he’s made a lot of records for a lot of bands on Metal Blade and Nuclear Blast and different stuff. It was an outlet to go to make a record.

JG: Definitely a good person to have on your side there.

JT: Yeah, for sure. He’s super easy to work with too. Super comfortable tracking with him. No pressure, you know what I mean? If I was having a not so good day, he just knew how to handle it to get me in the right mind frame.

JG: Whose idea was the name?

JT: My singer came up with it. He has been writing a graphic novel and it was kind of based off of some of the story he’s been writing. Also he lives off of a street called Sunflower, so he came to the studio when we were trying to figure out names and everything that anybody would say just sounded so stupid. We were all laughing about them and stuff and he brought up ‘The Sunflower Dead’ and it kind of stuck. Then I told him we should drop the ‘The’ and call it Sunflower Dead.