The Second Coming Of Nu Metal: There Was A Reason We Let It Die The First Time…

Now that I have a functioning computer again it is my job to gripe about this ongoing trend of resurgence in the ‘nu metal’ phase that was prominent for my eighth grade year once upon a time in 1998.  Once upon a time in a land where Insane Clown Posse was 1,000 times more relevant than and just as terrible as they are now, the powers that be decided KoRn and Limp Bizkit should be the face of a new generation.  To say the least, this generation had shitty taste in music mostly because our options were also limited.  Grunge was dead, Creed and Celine Dion were popular and Elton John was so lazy that he reused a song from 25 years prior to commemorate the most metal part of that era – Princess Diana’s brains splattered all over a dashboard. 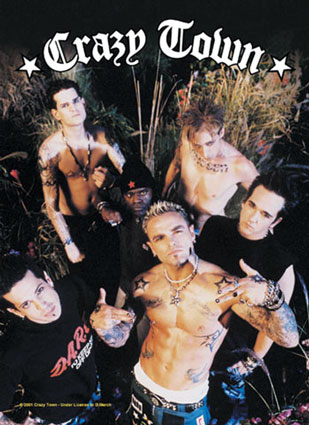 Here we are fifteen years later and the higher powers want us to think that Black Veil Brides, Maroon 5, Hollywood Undead and whatever the fuck Gangam style is are the best thing that music has to offer.  So in a time where talent is seemingly at a new low, the teens and early twenties crowd who are now pushing 40 and presumably a midlife crisis are doing their best Elton John impersonation and getting their instruments back out of the garage to attempt to revive their nu metal.  Granted, there are bands that I have always loved and still do love that were part of the nu metal movement, particularly Cold, The Deftones and Sevendust, but they at least all decided to continue forward and evolve from that trademarked sound that we all generally wish to forget.

It’s so strange to look back on a time fifteen years ago when bands like Machine Head and Soulfly had to think that this was the future of metal and both took the plunge into that dark territory.  Remember when Linkin Park, Staind, Crazytown, Disturbed, P.O.D., Papa Roach, KoRn & Limp Bizkit comprised about 90% of MTV and alt rock radio?  As time went on, KoRn became a revolving door of musicians and dabbled into rap and dubstep.  Limp Bizkit found a way to make a mockery out of an already horrible career.  Disturbed wrote five albums of seemingly the same material. Crazy Town was only mentioned again when members died.  Staind have since gone from metal to country trying to regain relevance. Papa Roach created albums that paved the way for love struck emo bands, and P.O.D. thankfully took the same route as Trapt and Puddle Of Mudd and faded into obscurity.  Bands like Static-X, Flaw, Ill Nino, Adema, Orgy, Soil, Kittie, Dope and Spineshank have all since become a shell of themselves at one point or another.

Only a handful of bands have stayed relatively the same over the past fifteen years both personnel wise and in sound.  Taproot has always seemed like the take it or leave it red headed step child of nu metal and stayed true to that sound and still enjoys a moderate touring career but no commercial success anymore.  Mudvayne used to be a household name in metal and were as close to the nu metal waters as most hardcore metalheads would go until the Hellyeah experiment took off and Mudvayne was no longer a priority.  Godsmack is the lone ranger of mainstream airplay for nu metal bands that don’t blow completely now such as Linkin Park or Incubus.  Nonpoint has undergone some changes lately but have always been pretty much exactly the same band that will play at any given radio festival at any given time apparently.  Slipknot is still the sign of what once was a powerhouse genre because they remained on the heavy, edgy side of the spectrum for the most part (ahem, Volume 3) while building the most devoted fanbase that wasn’t made entirely of clinically retarded juggalos who are still working at the local Hardees and KFC mopping floors many years later.  Plus when you sell as many albums as Slipknot did to angry twelve year olds, it’s hard for all of them to just abandon the Slipknot bandwagon.

Fast forward fifteen years to the present and these bands are all attempting a resurrection of a long forgotten career.  Dez Fafara is putting down the successful touring beast that is Devildriver for the eyeliner and a Coal Chamber reunion tour alongside once bitter enemies in Sevendust.  For some reason the big news as of late is Head rejoining KoRn in what seems to be a fairly permanent basis.  Adema minus the guy who was related to Jonathan Davis got a new record deal this week.  Soil is a touring band again pushing the first two albums that made them famous.  Guitarist Travis Miguel of the terrible Atreyu has gone to even more terrible pastures to join Trapt.  Orgy has lined up a tour with Vampires Everywhere! (who?) in an attempt to regain notoriety.  And this week both Welcome to Rockville in Jacksonville, Florida and Rock On The Range in Columbus, Ohio were announced.  In Jacksonville you can find Limp Bizkit as a headliner with Papa Roach, Thousand Foot Krutch, Nonpoint (of course), Skillet and David Draiman of Disturbed’s new band, Device, in tow.  In Ohio the nu metal reunion keeps up with the grunge resurgence also on that weekend by bringing KoRn (with Head of course), Papa Roach, Device, Sevendust, Thousand Foot Krutch, Skillet, & Love And Death (Head’s other band).

I’m not going to sit here and tell you that it’s all horrible, because it’s the music that I was forced to grow up on, but the good majority of it blows harder than a Kardashian in an NBA locker room.  The reason nu metal died so quickly was because much like the shit that they pass off as music right now, the sound had no staying power.  There were albums put out almost annually from some bands like KoRn that were all uninspired turds after Follow The Leader.  Only some of the lyrics from almost any given band carried any weight from an emotional standpoint.  When P.O.D. did one moving song with ‘Youth of The Nation’, it was earth shattering for MTV at the time and drew backlash from people who couldn’t accept that school shootings happen.  Songs like ‘Rollin’ by Limp Bizkit are all that anybody wanted to hear.  Most of the selling point of the music was the gaudy, party like a rockstar lifestyle that made us all hate Fred Durst even more.  Then there was Crazy Town, (Hed) P.E., fucking Vanilla Ice and Methods Of Mayhem who thought they should try to overtake the nu metal world with rap.  Out of the ashes of nu metal, Kittie and Chimaira both eventually matured into solid metal bands leaving behind any traces of 1998 while some of the better bands of that time such as The Union Underground, Endo, Twisted Method, 40 Below Summer, American Head Charge and Dry Kill Logic never lived up to their talent levels and are still obscure to anybody who didn’t actively search out music in the Napster era.

When I look back at the 1998-2000 nu metal era there are only a handful of albums that are still in regular rotation for me out of that many bands and that many albums.  Some of it is purely nostalgic, but most of it is that those are the best that the whole genre had to offer.  This is my top ten of those dark years which doesn’t include Linkin Park, Disturbed, KoRn or Staind although a lot of them were still huge mainstream successes.  Hopefully if high school kids buried vaults into the earth before Y2K they buried these albums for people to unearth in twenty five years instead of that abomination Tommy Lee once called Methods Of Mayhem: