Skip to content
Bludgeoning and inexorable through and through, grime-sovereigns SKELETAL SPECTRE once again incites the underworld with their deadly third conjuration Voodoo Dawn, due out on June 25th in North America on Pulverised Records.

Spearheaded by the unholy Death / Doom Metal queen Vanessa Nocera, Voodoo Dawn proudly displays a plethora of sagacious riffs that crush like a two-ton hammer and yet sickens enough to contaminate a diseased swamp. Sludge parts crawl in and out on occasions in an malefic alliance with some ugly D-Beat indulgence!

With the entire full-length effort written and recorded at Morbid Apparition Studios while mixing and mastering duties were reined under the watchful eye of Patrick Bruss (Ribspreader, Acid Witch, Cianide, Impetigo, etc), and with the artistic scarring by Adam Geyer (Bone Gnawer, Fondlecorpse, Wooden Stake, etc Voodoo Dawn is a tormenting solace of the most hideous hex-ridden Death Metal to ever cross one’s path.

An album teaser has been posted at this location. 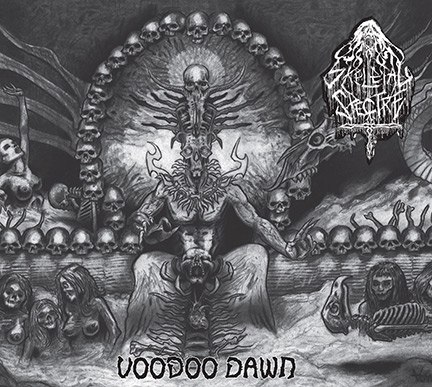 SKELETAL SPECTRE began in 2008 by “Behold the Pentagram” who wanted to start a band with a heavy Doom Metal influence. He hooked up with two other friends of his and the trio began writing and recording their debut album, Tomb Coven, which was released by Razorback Recordings in late 2009. The album was a mix of Celtic Frost worship, old-Black Sabbath, and early 90’s Swedish Death Metal ala Entombed. It proved to be a great debut that helped establish the band in a very-crowded underground metal scene. In the months after the release the band worked on some material for a planned MCD that eventually was canceled due to the guitar player leaving the band to work on other non-metal projects. “Behold the Pentagram” still wanting to continue the band, started working on songs for a 2nd album.
In November of 2010, Vanessa Nocera, known from the American Death Metal and Doom bands Scaremaker and Wooden Stake, and who had helped write lyrics for the first album, officially joined the band as lead vocalist; bringing a fresh and original approach to the band. “Behold the Pentagram” was looking for a singer that could do actual singing on the doomier parts, as well as evil death metal vocals on the more aggressive parts. After hearing Vanessa’s melodic vocals for Wooden Stake and death metal vocals for Scaremaker, he knew this was the right singer for the band. At the same time, “Behold the Pentagram” took over guitar duties as well as bass, and “Haunting the Beyond” remained in the band as the drummer.
With the new line-up in place, the 2nd album was recorded. An eight-song juggernaut of heavy, down-tuned, powerful Doom/Death Metal, with an even bigger emphasis on slower, catchier riffs and a more intense vocal performance. The 2nd album, titled Occult Spawned Premonitions showcased the band at their absolute best: “Behold the Pentagram’s” destructive, earth-shattering riffs and Vanessa’s demonic and ghostly death-banshee-from-hell vocals and love for classic gothic and supernatural horror themes! This is simply a band and album that will leave Doom and Death Metal fans very pleased and hungry for more!
In late 2011, the band began work on their 3rd album, Voodoo Dawn, which saw the band wanting to go in a more extreme direction, but still keeping the killer melodies and catchy hooks from the first two albums. Voodoo Dawn, was completed in 2012 and is even better and more intense than ever before, showcasing the band’s heaviness and memorable song writing along with an even more incredible vocal performance from Vanessa, who really gives her greatest vocal assault ever in a pure Death Metal way. This is truly the Skeletal Spectre album where everything has come together at last. A cohesive, dark, extreme, catchy, and utterly heavy Swedish Death Metal album with some of the most vicious female Death Metal vocals ever heard. 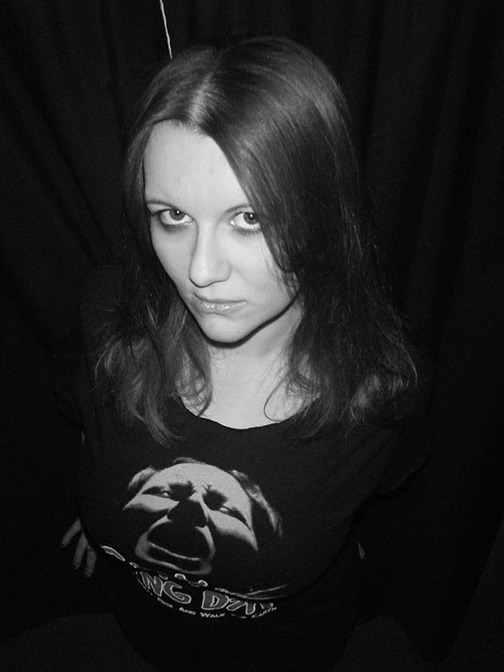