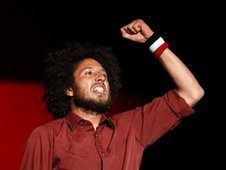 Rage Against the Machine are to headline the Download festival alongside rock band Aerosmith.

The announcement was made on Zane Lowe’s Radio 1 show last night (15 February).

The Californian band will also be playing a free gig in London’s Finsbury Park venue on Sunday 6 June as a reward to fans following their successful campaign for last year’s Christmas number one.

This year’s Download festival takes place between 11-13 June and the two bands join AC/DC as the main acts.

Other performers at the three-day event at Donington Park in Derby include Dave Grohl’s supergroup side-project Them Crooked Vultures, Thirty Seconds to Mars and Stone Temple Pilots.

They’ll be joined by Megadeth, Bullet For My Valentine, Motorhead and Deftones.

This month the organisers of Download announced they were banning flags from their main arena after an “overwhelming number of complaints”.

The festival’s director said it was to make sure everyone could enjoy the stage performances.