Philip Hansen “Phil” Anselmo (born June 30, 1968, in New Orleans, Louisiana) is an American musician who is best known as the lead singer and frontman for the heavy metal band Pantera. He is currently the frontman for the Louisiana-based metal act Down. He is also the owner of Housecore Records. Hit Parader ranked Anselmo as the thirty-seventh greatest heavy metal singer of all time.

Anselmo grew up in the inner city of New Orleans. He attended Grace King High School located in Metairie. His father owns and operates a restaurant in Metairie called Anselmo’s. Anselmo has a pet rottweiler named Dracula. Anselmo has said in various interviews that he was very quiet and secluded as a child. He spent some time working on fishing boats as a young man. During a 2002 Ozzfest interview with the radio show Opie and Anthony, Anselmo shared a story that, at the age of 15, he started a fire in his home to scare his sister but accidentally burned the house down in the process. While a teenager, Anselmo joined the band Samhain (not to be confused with Glenn Danzig’s band Samhain). From the early to mid ’80s, Anselmo was a member of the band Razor White. While they did have some original material, they mainly played Judas Priest covers. 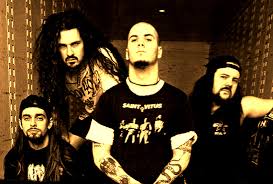 Pantera was an unsigned glam metal band, with three self-released albums to their name. In 1986 it was decided by the band to replace singer Terrence Lee, who was primarily a glam metal singer, because they were heading in a different direction musically. Seeking a new frontman to continue on this heavier path, the band was led to 19-year-old Anselmo. In 1987 after several meetings, Anselmo was added to the Pantera lineup. The band were so impressed with Anselmo that they re-recorded some of Terrence Lee’s vocals for their latest release. Anselmo relocated to Texas to record Power Metal, which was released in 1988 on the band’s own record label Metal Magic Records. Following the release of Power Metal, the band dropped its glam image and adopted a more casual look. The band was signed to a record label by a scout who was stranded due to a hurricane. The band saw the scout at the venue and were disheartened when he left mid-set. It turned out that the scout had left to phone the record label and to tell them to sign Pantera as soon as possible. Pantera recorded the album Cowboys from Hell in 1990, and a long tour began. The band documented portions of this tour on their first home video, Cowboys from Hell: The Videos, released in 1991.

In 1992 Pantera recorded Vulgar Display of Power. That same year Pantera released a promo titled Hostile Mixes that contained four songs, three of which were remixes. The first two remixes were done by Justin K. Broadrick of Godflesh and the last was done by J. G. Thirlwell of Foetus. In 1994 Pantera released Far Beyond Driven, which debuted at #1 in the US. In late June Anselmo was charged with assault following an altercation with a security guard when fans were prevented from getting on stage. Anselmo was released on $5,000 bail the next day. The trial was delayed three times. In May 1995 he apologized in court, pleaded guilty to attempted assault, and was sentenced to 100 hours of community service.

In 1996 Pantera released their fourth studio album with Anselmo, titled The Great Southern Trendkill. Anselmo recorded the vocal tracks for this album in New Orleans, while the other members of Pantera recorded in Texas. In 1997 Pantera released their first and only official live album titled Official Live: 101 Proof. This album contained two new tracks, “I Can’t Hide” and “Where You Come From.” In 2000 Pantera released their final studio album titled Reinventing The Steel. In 2003 Pantera released a best-of Album titled The Best of Pantera: Far Beyond the Great Southern Cowboys’ Vulgar Hits! (titled Reinventing Hell: The Best of Pantera in Europe). The album featured songs from five studio albums with Anselmo, and also included three cover tracks, “Planet Caravan” and “Hole In The Sky,” written by Black Sabbath; and “Cat Scratch Fever,” written by Ted Nugent. A bonus DVD was also made, containing all the band’s music videos. Later that year Pantera disbanded over communication problems and accusations that Anselmo had abandoned the band.

Following the breakup, Anselmo devoted much of his time to a longtime side project, Superjoint Ritual. Having heard this, the Abbott brothers of Pantera (guitarist Dimebag Darrell and drummer Vinnie Paul) formed Damageplan with former Halford guitarist Pat Lachman on vocals and Bob Zilla on bass. Some fans blame Anselmo for Pantera’s breakup, because of statements in the heavy metal press. Anselmo has accused journalists of twisting the facts, publishing what they think sells best. Pantera bassist Rex Brown, widely known as being the one neutral voice in the matter, has blamed both sides for the split.

After Vinnie Paul slammed Superjoint Ritual, saying Anselmo could not even keep his eyes open, Anselmo replied, “I just hear a big and sad yellowbelly crybaby fuckin’ knowing that his meal ticket is in a different fuckin’ band. …You would have to know those guys to really understand where I was coming from, they’re scared of their own fuckin’ shadows. And, all that said, I wish them the best of fuckin’ luck, I still love ’em.” Anselmo had engaged in a war of words with Dimebag since the fall of Pantera, culminating in the statement “Dimebag deserves to be beaten severely” in the December 2004 edition of the UK’s Metal Hammer magazine. Initially, he denied making the statement, but later changed his story in a VH1 Behind The Music special on Pantera, claiming that the comment had been lighthearted and made off the record. However, Vinnie Paul told the press that he had heard the audio files of the interview and that Anselmo had not been coerced by the Metal Hammer journalist into making the statement, nor had he been misquoted.

In December 2004 Dimebag Darrell was shot and killed while performing with Damageplan.At the request of Dimebag’s family,Anselmo did not attend his funeral.

In a lengthy and emotional video posted on the website community YouTube, Anselmo describes his regret over his previous behavior, and has written and recorded music dealing with the loss of Dimebag on the new Down record, Down III: Over the Under. The band has dedicated their song “Lifer” to Dimebag.

Down has been Anselmo’s main recording and touring band since 2006.

Down is an American heavy metal band formed in 1991 in New Orleans, Louisiana. The band is a supergroup, its various lineups consisting of members and former members of Pantera, Corrosion of Conformity, Crowbar, Eyehategod and Kingdom of Sorrow.

Since its inception, Down has released three studio albums and has gone on hiatus twice to focus on the members’ respective bands

After losing everything in the aftermath of Hurricane Katrina, Mike Williams moved into Anselmo’s spare apartment. The two spent countless hours listening to Phil’s collection of early hardcore bands. They began jamming with Hank III and Collin Yeo, who were united by their desire to have a hardcore/crust punk band of their own.

Superjoint Ritual was a New Orleans metal band formed by Anselmo, Joe Fazzio, and Jimmy Bower in the early 1990s, later to be joined by Hank Williams III, and Kevin Bond. Their style can be considered a mix of groove metal and hardcore punk. Bands like Venom, Slayer, Celtic Frost, Voivod, and Darkthrone have also been noted as influences. The name Superjoint Ritual comes from a lyric in the Darkthrone song, “The Pagan Winter.” According to Bower, Anselmo wrote 70-80% of the group’s music. During their time together they released two full length albums on Sanctuary Records. Use Once And Destroy in 2002 & A Lethal Dose Of American Hatred in 2003.

Christ Inversion was formed in 1994. The group was a short-lived blackened death metal project formed by Anselmo. Most of their lyrics were based on horror films and Satanism. The band recorded two demos and then disbanded without ever recording a full-length album. The first demo was renamed and re-released in 2004 by Funeral in Hell Records. The second demo is set for re-release on Anselmo’s own Housecore Records in October 2008

The band released one EP called Southern Isolation. It originally contained four songs, but was later re-released with a fifth bonus track. The band consisted of Stephanie Opal Weinstein on vocals and guitars, Anselmo on vocals, backing vocals and guitars, “Big” Ross Karpelman (of Clearlight) on keyboards, and Sid Montz (of Crowbar) on drums.

One rare track called “Faded” has been credited to Southern Isolation on the Manson Family Soundtrack, which is due to be released on Anselmo’s Housecore label.

Viking Crown was a short-lived and essentially solo side project started by Anselmo in the mid-90s. The members of the band are Anselmo (under the pseudonym Anton Crowley) guitars, bass and drums; Killjoy on vocals; and Opal Enthroned (Stephanie Opal Weinstein) on keyboards. On their first album “Unorthodox Steps of Ritual,” Anselmo played every instrument and laid down his own vocals. The band never performed live.