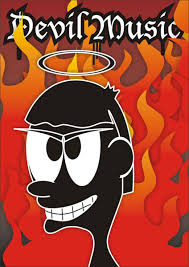 The Devil is said to have the best tunes, but what do they sound like? A new film about the history of heavy metal highlights the so-called Devil’s Interval, a musical phenomenon suppressed by the Church in the Middle Ages.

On the surface there might appear to be no link between Black Sabbath, Wagner’s Gotterdammerung, West Side Story and the theme tune to the Simpsons.

But all of them rely heavily on tritones, a musical interval that spans three whole tones, like the diminished fifth or augmented fourth. This interval, the gap between two notes played in succession or simultaneously, was branded Diabolus in Musica or the Devil’s Interval by medieval musicians.

A rich mythology has grown up around it. Many believe that the Church wanted to eradicate the sounds from its music because it invoked sexual feelings, or that it was genuinely the work of the Devil.

It is a mythology much beloved of long-haired guitar wizards.

In the newly-released documentary Metal: A Headbanger’s Journey, bassist Alex Webster of death metal act Cannibal Corpse pays tribute to the effect of the forbidden “Devil’s note” in Heavy Metal.

And rock producer Bob Ezrin pronounces: “It apparently was the sound used to call up the beast. There is something very sexual about the tritone.

“In the Middle Ages when people were ignorant and scared, when they heard something like that and felt that reaction in their body they thought ‘uh oh, here come the Devil’.”

It all sounds a little like the plot of a far-fetched Da Vinci Code sequel.

But Professor John Deathridge, King Edward professor of music at King’s College London, says the tritone had been consistently linked to evil.

“In medieval theology you have to have some way of presenting the devil. Or if someone in the Roman Catholic Church wanted to portray the crucifixion, it is sometimes used there.”

But there were musical treatises and sets of rules produced that did come to forbid the use of the interval, which was seen as wrong when it came up in choruses of monks.

“There are strict musical rules. You aren’t allowed to use this particular dissonance. It simply won’t work technically, you are taught not to write that interval. But you can read into that a theological ban in the guise of a technical ban.”

The Devil’s Interval enjoyed great popularity among composers in the 19th Century, when “you have got lots of presentations of evil built around the tritone”.

“It can sound very spooky. It depends on how you orchestrate. It is also quite exciting,” says Professor Deathridge. “[Wagner’s] Gotterdammerung has one of the most exciting scenes – a ‘pagan’, evil scene, the drums and the timpani. It is absolutely terrifying, it is like a black mass.

“There is a big connection between heavy rock music and Wagner. They have cribbed quite a lot from 19th Century music.”

A more modern advocate of the tritone is Black Sabbath – the rock outfit led by Ozzy Osbourne – particularly in their signature song, Black Sabbath, a milestone in the genesis of heavy metal.

But this link between heavy metal and musical conjuring of the Devil in the Middle Ages comes as a bit of a surprise to the band’s guitarist, Tony Iommi.

“When I started writing Sabbath stuff it was just something that sounded right. I didn’t think I was going to make it Devil music,” Iommi tells the Magazine.

He says he was aiming for “something that sounded really evil and very doomy” but admits he may have been unconsciously influenced by other music and was certainly not aiming to summon the Devil.

“Beforehand [we were doing] jazzy blues. It certainly wasn’t something I thought about – I didn’t read music. I had no terms for anything

“I like all sorts of classical stuff – various sorts of music, jazz, blues, to classical played a big part in my writing.”

There are, however, plenty of bands who consciously use tritones, including the notorious metal act Slayer, who offered their tribute in an album simply entitled Diabolus in Musica.

But Anthony Pryer, who runs a postgraduate course in historical musicology, believes heavy metal bands have got the wrong end of the stick “firmly with both hands”.

“It was recognised to be a problem in music right back to the 9th Century. It is a natural consequence, and so they banned it. They had rules for getting around it.

“It was called Diabolus in Musica by two or three writers in the medieval or renaissance [period]. It was ‘false music’, the intervals weren’t natural.

“They may have thought it was devilishly hard to teach the singers not to sing it. I don’t think they ever thought of it as the Devil dwelling in music.

Now the Devil’s Interval has a natural home in many genres, particularly film music, jazz and blues, where, says Mr Pryer, it is “quite common because of its association with tension and sinister things”.

“A lot of films have what musicians call Captain Tritone in them. As soon as there is a [baddie such as a] foreign officer out comes the Tritone. It’s a sort of badge – here’s Mr Nasty. What’s going to happen?”

Dissonance does provoke a strange feeling, Mr Pryer says, but it is nothing to do with Satan.

“[Dissonance] is something that yearns to be resolved. A very good example would be the opening of West Side Story, Maria. It wants to resolve into the next note. It is a special kind of tension. It gives that angular, edgy, spooky feel. Film music is often extremely sophisticated at signalling to a listener here is a particular kind of character. It is a leitmotif, first used by Wagner.”

Whatever the real story of the Devil’s Interval, the romantic linkage between Lucifer and popular music will continue, and stretches back from heavy metal through the Rolling Stones to Robert Johnson and beyond.

“He did this incredibly difficult [piece] and claimed in a dream he had heard the devil giving him instructions how to do it.

“Two centuries later, he would probably have been in a heavy metal band.”

1 Comments on “The Devil’s Music”